Why Justice is Worth Singing About (Revelation 15)

Topic: One Mission: Until I Come Passage: Revelation 15:1–8

I. His Judgment, Our Praises

I was looking the other day at an online worship song catalog that allowed you to search for songs by themes. You can probably guess which themes had the most songs. Christmas and Easter were big, with over 2700 songs for Christmas, and over 3500 songs for Easter. The “love of God” category contained over 1300 songs, “mercy” came in at 1624, and “grace” at 2102. The largest category was a generic one, “praise”, with over 4500 songs fitting that criteria.

But in light our passage this morning, I decided to check two other categories, “judgment” and “wrath”. There were links for both of those themes, and when I clicked on them, it was pretty clear that most of the songs listed in those categories were not songs about future wrath or coming judgment, but about the cross, about that glorious truth that, in his death, Jesus took the judgment and wrath we deserved. You can probably think of some songs we sing that mention one or both of those words (“In Christ Alone”, “Jesus, Thank You”).

And yet, even though most of the songs in these categories were related to the cross, the number of songs listed was tiny compared to the categories I mentioned earlier. Instead of find-ing thousands of songs, there were just 55 songs listed under “judgment”, and 105 for “wrath”.

If you've been in the church for really any length of time, I don't think you're surprised by those numbers. In fact, you may not be able to even think of one hymn or praise song that deals with future wrath or coming judgment. Well... let's rectify that by looking together at Revelation 15.

We find here John continuing to record for us the divinely-given visions that make up the majority of this book. Listen to the particular vision that begins in verse 1...

Then I saw another sign in heaven, great and amazing, seven angels with seven plagues, which are the last, for with them the wrath of God is finished.

I think when John writes “great and amazing” he's confirming for us the overwhelming other-worldly-ness of these stunning visions. Can you imagine? But please don't miss the monumental moment this verse represents. As verse 7 will confirm, these are the seven bowl judgments, and “with them the wrath of God is finished.” Now wait a minute. When did the wrath of God begin?

Those seals, you may recall, were affixed to a scroll that only the Lamb was worthy to open, as we heard in chapter 5. What does this scroll represent? As the book goes on to explain, and as is confirmed here in chapter 15, the scroll represents God's plan to bring ultimate justice to the world. If you simply 'follow the fractions' in this book, you'll see that God's justice has been intensifying as the chapters progress, leading us to this conclusion with the seven bowls.

But consider with me who else is depicted in the vision recorded here in chapter 15. Verse 2...

And I saw what appeared to be a sea of glass mingled with fire—and also those who had conquered the beast and its image and the number of its name, standing beside the sea of glass with harps of God in their hands

If we knew nothing else about the need for God's ultimate justice, this one verse would be a great place to start. We might ask, “What does it mean that the individuals here have 'conquered the beast and its image and the number of its name'?” To answer that question, we'd have to look back to 13:15–18. There we read this about the second beast (a.k.a. “the false prophet”):

This symbolic number (one less than seven—a number of divine perfection—but also three times confirmed... “666”; this number) is a number probably indicating a false god. Just as God's people were symbolically marked in chapter 7, those who worship this false god are also symbolically marked, in order to 1) demonstrate their allegiance to the first beast, and 2) just to simply participate in commerce, to buy and sell in the realm of the beast. And as we heard in 13:15, those who would not receive this mark of allegiance, could be killed for their defiance.

Now, these images are not hard to decipher in light of the first readers of the Revelation, those for whom this book was written. They understood the pressures of living under the Roman system of false gods, and even more pressing, the cult of Emperor worship that was growing in Empire-wide popularity. In fact, their region was ground zero for this detestable movement.

So as we think about God's wrath being finished in the seven bowl judgments introduced here, as we think about God's plan for ultimate justice being fully implemented, we need to remember that the first readers of this book were people who understood all too well the need for ultimate justice. These Christians were suffering, and their suffering would worsen. Even as the church in Pergamum mourned Antipas (2:13), who was killed for his faith, I believe all of these churches could understand the scene in Revelation 6:10, where the souls of those martyred,

...cried out with a loud “O Sovereign Lord, holy and true, how long before you will judge and avenge our blood on those who dwell on the earth?'”

But God's ultimate justice means more than retribution. It also means... reward for those who have conquered; those who, in the face of earthly powers and worldly temptations, did not ultimately give up or give in. This is how the twenty-four elders expressed it in 11:17–18...

“We give thanks to you, Lord God Almighty, who is and who was, for you have taken your great power and begun to reign. [18] The nations raged, but your wrath came, and the time for the dead to be judged, and for rewarding your servants, the prophets and saints, and those who fear your name, both small and great, and for destroying the destroyers of the earth.”

So what is the response of those described in verse 2, what is their response in light of the imminent opening of the floodgates of divine wrath? They sing! Look at verses 3-4...

And they sing the song of Moses, the servant of God, and the song of the Lamb, saying, “Great and amazing are your deeds, O Lord God the Almighty! Just and true are your ways, O King of the nations! [4] Who will not fear, O Lord, and glorify your name? For you alone are holy. All nations will come and worship you, for your righteous acts have been revealed.”

Why is this song called both “the song of Moses” and “the song of the Lamb”? Well, I believe “the song of the Lamb” is the song mentioned in the previous chapter, 14:3–4, where John tells us “they were singing a new song … [a song] no one could learn... except the 144,000 who had been redeemed from the earth.” As John goes on to confirm, “It is these who follow the Lamb wherever he goes.” But I believe “the song of Moses” point us back to Exodus 15, where we find a similar song, a song that also glorified our God, who is mighty to save; a song that was also sung by those (v. 2) “standing beside the sea”, those who had also been redeemed.

Why are they moved to lift their voices in song? Well, the very truths the song lyrics reveal are confirmed by the next revelation. Look with me at verses 5-8. John tells us...

Listen again to that description in verse 8, “and the sanctuary was filled with smoke from the glory of God and from his power”. John has been given a symbolic glimpse of the awesome reality that God really is glorious and powerful in ways we can't even comprehend. So why were those redeemed by the Lamb lifting their voices in song in light of such awful judgments, such devastation, in light of the coming flood of divine wrath? Because the glory and power of God would be revealed! And when God's glory and power are revealed, God's people worship.

Just as the song proclaimed, God is great! God is amazing! He is just and true! He is King! We should fear him and glorify his name! He is holy! In fact, the final phrase of that song, in verse 4, where we read, “for your righteous acts have been revealed”, is probably better translated in this context as, “for your judgments have been revealed”. The redeemed from every nation will one day worship God in light of the ultimate, perfect justice he will being to our world; both retribution and reward. For in both his redemption and his wrath, our God is and should be glorified.

III. Responding to the Revelation

Brothers and sisters, too many people, too many Christians, are simply disturbed or grieved or fearful in light of this book. Or they are none of those things, because they simply see this book as a kind of textbook for what we could call 'end times arithmetic'. Of course, it isn't wrong to be grieved by what the Revelation reveals. And yes, we should be shaken and sobered by the realities described here. But if we do not leave this book... singing, I'm afraid we haven't really understood the book. Revelation should inspire us to sing!

Why sing? Why worship? Why should we be driven to praise? Yes, we absolutely should sing in light of the eternal consummation and communion and consolation that God's people will enjoy, forever and ever... in his presence. Those who do not give in and do not give up, those who overcome (as Jesus told every church in the letters of chapters 2-3... those who overcome) will be rewarded according to the justice of God.

But shouldn't we also rejoice when the tyranny of sin is ended? Shouldn't we also glorify God when our humanity-wide rebellion is crushed, once and for all? Shouldn't we praise him when justice that is long overdue is finally meted out? We do that very thing when justice is done here and now. When an evil regime is ended, or a killer brought to justice, or embezzled savings are restored, or when an abuser is sentenced, or an unjust law overturned... we rejoice! Some people even take to the streets to celebrate!

Why should it be any different in the end, when our world is flooded by God's perfect justice? It is possible to both grieve for sinners lost and give thanks for sinners stopped; to be shaken by His judgments and in awe of his justice. Remember God is also grieved over each sinner lost, but satisfied with justice for each sinner judged. Those feelings are not mutually exclusive. Of course, all of this wrath-inspired praise must be rooted in a cross-inspired humility.

Justice is worth singing about, both justice at the cross, and the justice still to come. As you finish the Revelation this week, ask God to inspire this kind of worship in you as you read. Glorify God for both his mercy and his justice, for his grace and his judgments. Give thanks for how His justice will purify our poisoned universe, purging it of all evil, and restoring it to a world of glorious righteousness. Praise him for that glorious day to come. As another song puts it...

One day the trumpet will sound for His coming
One day the skies with His glories will shine
Wonderful day, my Beloved One bringing
My Savior, Jesus is mineLiving, He loved me
Dying, He saved me
Buried, He carried my sins far away
Rising, He justified freely forever
One day He's coming
Oh glorious day, oh glorious day. 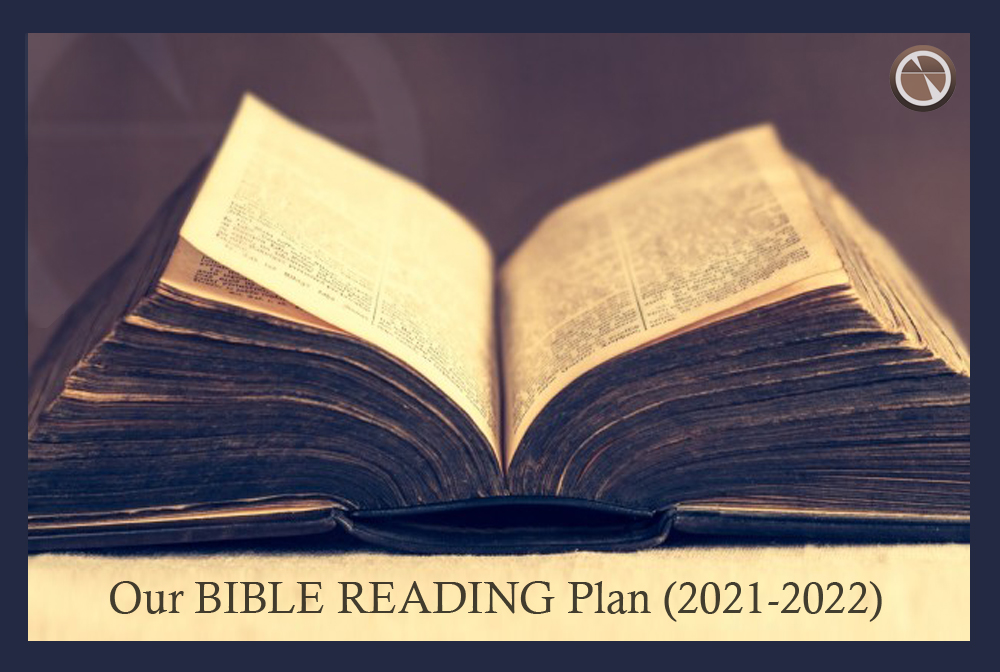 How to Conquer the Dragon (Revelation 12:11)

The Heart Where Jesus is Knocking (Revelation 3:20)