Way of Grace Church is now meeting online! Join us Sunday at 10:00am by heading over to www.wayofgracechurch.com/stream (please log in by 9:55am).

Ruled by the Golden Rule

(One Truth: Walk in Truth)

I'm almost positive that you've seen, at one time or another, at least one volume from the “for dummies” series of books. You know the series I'm referring, don't you? This title began in 1991 with the book, “DOS for Dummies” (DOS is a computer language, BTW). Over the course of twenty-eight years, the publishers have succeeded at adding 2500 more titles “for dummies” like you and me.

No, the success of these publishers has not come from their willingness to insult the mental capacity of potential buyers. They've succeeded because they have playfully tapped into the normal experience of feeling totally lost when it comes to topics like accounting, beekeeping, real estate, golf, Medicare, cooking, psychology, networking, and many, many others. They've built their business on the value of breaking down and explaining complicated ideas, of simplifying complex information.

This morning, Jesus Christ wants to do that very thing for us. No, he hasn't left us book called “Human Relationships for Dummies”. But he has simplified the complexities of that perennial question, “How should I relate to other people?” Turn over, if you haven't already, to the Gospel of Matthew, chapter 7.

Look with me, if you would, at Matthew 7, verse 12. This is what Jesus tells us... “So whatever you wish that others would do to you, do also to them, for this is the Law and the Prophets.”

Let me read that same verse from another translation. I like the feel of this one better. This is from the New American Standard Bible... "In everything, therefore, treat people the same way you want them to treat you, for this is the Law and the Prophets.” [NASB]

Let me break this verse up a bit. Let's start with the principle itself, right in the middle of v. 12.

“...Treat people the same way you want them to treat you...” There you have it. “Relationships 101”, with your instructor, Jesus. In general, no matter the individual, Jesus reveals here that responding to others, interacting with others, relating to others, working with others should be guided by this very simple principle: the way we would like others to treat us, is the way we should treat them.

Now, think about that for a moment. That applies equally to everyday interactions in your circles, as well as very large social justice issues. For example, listen to a number of quotes from history related to the issue of slavery and how this principle from Jesus applies.

In 1788 John Newton, the writer of the hymn “Amazing Grace”, wrote a book called  “Thoughts Upon the African Slave Trade”. Newton was a former slave trader. His book begins with the words of Matthew 7:12.

In 1858 Abraham Lincoln used this same principle to evaluate slavery: "As I would not be a slave, so I would not be a master." The next year, he declared: "He who would be no slave, must consent to have no slave."

Several years before, in 1855, Frederick Douglass, a former slave, wrote: "I love the religion of our blessed Savior. I love that religion that is based upon the glorious principle, of love to God and love to man; which makes its followers do unto others as they themselves would be done by. If you demand liberty to yourself, it says, grant it to your neighbors. If you claim a right to think for yourself, allow your neighbors the same right. It is because I love this religion that I hate the slave-holding, the woman-whipping, the mind-darkening, the soul-destroying religion that exists in the southern states of America."

“...Treat people the same way you want them to treat you...” Now, someone might say, well what if the person wants to be treated badly because they are a masochist or because they have an unhealthy way of dealing with guilt? Well, as I mentioned before, Jesus is speaking in general terms, not to every single, possible scenario.

Jesus is speaking to what all of us already know: deep within every person (even those with unhealthy desires), there is a longing to be loved; a longing to be respected; a longing to be heard; a longing to be treated in fairness, with kindness, with patience and understanding, with compassion... with grace. These longings are universal. That's precisely why we find some version of this same Matthew 7:12 principle in culture after culture, throughout history.

It wasn't until the 17th century that scholars in England dubbed this principle “The Golden Rule”. Just as there were golden rules in mathematics and other fields, theologians saw this teaching from Jesus as the golden rule of ethics.

About this “Golden Rule”, the Reformer John Calvin wrote: "Where our own advantage is concerned, there is not one of us who cannot explain minutely and ingeniously what ought to be done. Christ therefore shows that every man may be a rule of acting properly and justly towards his neighbors, if he does to others what he requires to be done to him."

Two hundred years later, John Wesley similarly wrote, “[The golden rule] commends itself, as soon as [it is] heard, to every man's conscience and understanding; no man can knowingly offend against it without carrying his condemnation in his own breast."

But what if we take this simple principle and move back into the complexities of our world, especially the challenges of our your everyday life?

What does a life that is ruled by the “Golden Rule” look like? Some philosophers believe that question is not really the point of this principle. One reference website puts it this way:

“Normally we interpret the golden rule as telling us how to act. But in practice its greater role may be psychological, alerting us to everyday self-absorption, and the failure to consider our impacts on others. The rule reminds us also that we are peers to others who deserve comparable consideration.” (https://www.iep.utm.edu/goldrule)

Those are certainly valid points. But a life in which we “consider our impact on others”, in which we are not simply slaves to “everyday self-absorption”, that kind of life does manifest itself in specific ways. How could it not? So what does such a life look like?

Well, that question drives us right back to the context in Matthew 7. Some version of this “Golden Rule” might be found in different historical and cultural contexts, but the only context that really matters this morning is the biblical context; the context of Jesus' own words in this 'mountain message'. Look again at the final phrase in verse 12:

“So whatever you wish that others would do to you, do also to them, for this is the Law and the Prophets.”

What exactly does Jesus mean when he talks about “the Law and the Prophets”? He's talking about the books we call the “Old Testament”; the Hebrew Bible. The Apostle Paul would make a very similar point about love summing up the ethical teaching of the OT. He would later write in Galatians 5:14... For the whole law is fulfilled in one word: “You shall love your neighbor as yourself.” A similar point was made in our opening reading this morning from Rom. 13:8-10.

But within the context of the entire 'mountain message', this reference to “the Law and the Prophets” also reminds us to look back, not simply to the OT, but also to the beginning of Jesus' discourse. Look back for a moment to 5:17. Jesus told his disciples: “Do not think that I have come to abolish the Law or the Prophets; I have not come to abolish them but to fulfill them.” Why is the verse important? Because it explains what Jesus goes on to do in the rest of chapter 5 in terms of true kingdom righteousness. And He carries that explanation on into chapter 6, and... into the opening verses of chapter 7.

In the same way, as we talked about before, even when we are behaving badly, we ultimately want understanding and forgiveness. Even when we are acting like someone's enemy, deep down, if we were able to, we would choose a loving response over a hostile response; gentle correction over harsh retaliation. Therefore, we should hear the “Golden Rule” when Jesus teaches us to “love your enemies and pray for those who persecute you” (5:44).

What do we find in Matthew 7:12? We find a simple but powerful summary of the kingdom righteousness that Jesus is describing for us throughout this 'mountain message'.

But let me point out one more feature of Matthew 7:12. Notice the first word of the verse: “so”. In the NAS translation we heard the same word translated as “therefore”. Whichever word you prefer, both point us backwards. As we've already seen, this word, like the “Golden Rule” itself, does connect us back to Jesus' teaching throughout this 'mountain message'. But I believe that first word also points us back to the immediate context, to the preceding passage.

Remember what we learned last time. In 7:7-11 we heard about divine promises of success for those who “ask”, “seek”, and “knock” in persistent prayer. For those who belong to Jesus, there is (v. 11) a “Father in heaven” who will “give good things to those who ask him.” It's that fact that leads to the “so” of verse 12; that is, God's generosity to us should inspire us and embolden us to be generous toward others. To put it another way, heavenly reassurance in light of our needs should counter the fear that so often rules our earthly responses. If God's grace colors his attitude toward his children, shouldn't it color our attitude toward others?

But does knowing all this about Matthew 7:12 mean our attitude and actions will now be ruled by “The Golden Rule”? Is our greatest need education... and maybe a good 'pep talk'?

So what can we do? We can look beyond what was taught to the Teacher himself. Do you know Jesus 'walked the talk'? He practiced this “Golden Rule” throughout his entire life, right up to and in his death. Think about it: could there be a better picture of the “Golden Rule” than the cross of Jesus Christ? Which prisoner would not want freedom? Which slave would not want emancipation? Which lost sheep would not want rescue? Which dying man or woman would not want life? Or blind man sight? Which prodigal would not desire forgiveness and reconciliation?

Which person, if able to truly see the ugliness and destructiveness and ultimate emptiness of living a me-centered life in a God-centered universe, [which person] would not want a new heart, one that beats for God? Jesus understood this. More than that, He died to make it possible. While our treatment of others is so often ruled by fear and greed and defensiveness and spite, Jesus' treatment of us was ruled by grace. Even now, having beaten death, he practices this “Golden Rule” as our High Priest.

Want to be ruled by the “Golden Rule”? Then seek the true change that comes when you submit to the Ruler who gave us this rule; the Lord who laid down his life to change you. As you do, and if you have, seek Him even now in light of sinful inclinations. Seek forgiveness for those you have not treated this way. Seek love for those with whom you know you need a change. Seek resolve to wake up each day and say, “By your grace, Father, help me to treat others today as I would want to be treated... that they might see Jesus in me.” 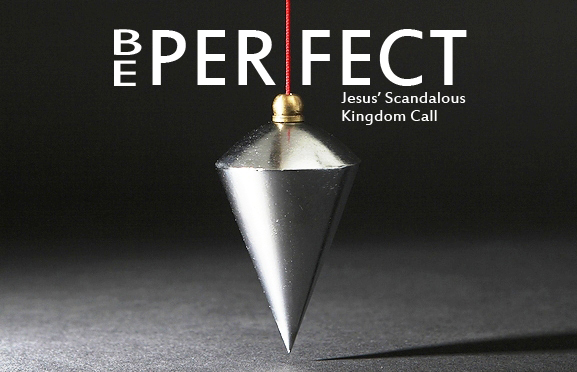 More in Be Perfect (Sermon on the Mount)