I. A Superbug Scenario

This is from a Washington Post article printed about 18 months ago:

For the first time, researchers have found a person in the United States carrying bacteria resistant to antibiotics of last resort, an alarming development that the top U.S. public health official says could mean “the end of the road” for antibiotics.

The antibiotic-resistant strain was found last month in the urine of a 49-year-old Pennsylvania woman. Defense Department researchers determined that she carried a strain of E. coli resistant to the antibiotic colistin...The authors [of a recent study] wrote that the discovery “heralds the emergence of a truly pan-drug resistant bacteria.”

Colistin is the antibiotic of last resort for particularly dangerous types of superbugs, including a family of bacteria known as CRE, which health officials have dubbed “nightmare bacteria.” In some instances, these superbugs kill up to 50 percent of patients who become infected. The Centers for Disease Control and Prevention has called CRE among the country’s most urgent public health threats.

Do developments like that concern you? They should. In 14th century Europe, the bubonic plague (or Black Death) killed anywhere from 75-200 million people, reducing population levels by 30-60%. If our best medical options fail us, who's to say that couldn't happen again?

And what if it did? What if a pandemic broke out in the next few weeks or months, and millions began to perish? What might start with a seemingly harmless cough would eventually lead to a deadly form of pneumonia. All of us would begin losing people we loved, and all of would be at risk.

But in the midst of that outbreak, imagine if you heard about a vaccine; a new vaccine that was actually saving lives. Though this vaccine hadn't come through the traditional channels, there seemed to be good reasons to believe it was effective. So imagine you were able to get this series of shots.

And for the next two weeks, everything seemed okay. You felt relieved. You felt hopeful. But then, one morning, something changed: you began to cough. Then your mind began to race: Could it be allergies? Maybe it was just a common cold.

Then you began to wonder if the vaccine really worked; or if the treatment was administered correctly. As the cough persisted for a couple days, you began to worry that something was terribly wrong; that maybe, just maybe, you really weren't immunized. But wait. What if there was some other way, some kind of indication, a sign to be sure the vaccine was effective. So you pull out your phone and call the small clinic where you were treated.

Would you be relieved if you found out there were at least three indicators you could look for in order to verify the vaccine; to verify you were actually immunized? I think any of us would be incredibly relieved. After all, this would be a matter of life or death, right?

The NT preserves for us three letters written by the Apostle John, the author of the Gospel that bears his name. In the first of those three letters, in the book we call “I John”, the Apostle is writing to tackle that very same question about verifying a vaccination. But his concerns are focused on the spiritual diseases of sin and death, and the cure that is Jesus Christ. He makes his purpose crystal clear in I John 5:13. He writes...

I write these things to you who believe in the name of the Son of God, that you may know that you have eternal life. (I John 5:13)

John is writing to give the spiritually vaccinated directions on verifying they are truly immunized. Stop and think for a minute about why this is so incredibly important. If people who are really still sick and dying, believe they are healthy, or are being told they are “healthy”, they won't be looking for real help. And the symptoms of their spiritual illness will either be downplayed or addressed with worldly treatments.

But let's allow John to explain why he wrote about this critical issue. Turn to I John 3:19-21. Beyond his explicit statement in 5:13, John provides several statements about what is motivating him to write this kind of letter to these followers of Jesus. The longest and clearest statement is found here in 3:19-21. Let's start here, and then we'll consider a couple of other reasons. First of all, I think we can confidently say that John is writing in order...

By this we shall know that we are of the truth and reassure our heart before him; [20] for whenever our heart condemns us, God is greater than our heart, and he knows everything. [21] Beloved, if our heart does not condemn us, we have confidence before God...

But as John reminds these believers, “God is greater than our heart”. What does that mean? It means that God's words are greater than those inward words of condemnation. It means God, since “he knows everything”, is able to tell us what is and what is not true about our spiritual condition.

And this is why John is writing to them. He wants them to understand what God has said about new life, about spiritual immunization and spiritual health. And by means of the truth, John wants to reassure them; to encourage them; to comfort; to soothe; to speak peace.

And that remains true in terms of the power of this book. This is how God wants to use this book in your life. Do you need reassurance this morning? It's important to see that one implication of what John is saying is this: struggling with assurance does not mean assurance is not possible; that is, questioning whether you are right with God doesn't necessarily mean you aren't. John knows believers can struggle in this way. So he writes to reassure.

But I believe John has other goals in mind. As he reassures, he also wants...

Just like the vital signs related to your physical life, John describes what we could call 'spiritual vital signs'. And as I alluded to in the opening illustration, John describes three specific 'signs of life' in this letter. They are 1) keeping God's commands, 2) loving God's children, and 3) confessing God's Son.

Now, in the coming weeks we will dig into each of these topics. But for now, I want you to see that what John is writing here is also meant to refocus those believers who need reassurance.

Think about your body: if you have no pulse and your body is cold, you are most likely dead, right? But body temperature and heart rate can still be an issue, even if you aren't dead. So even if a doctor reassures you that you are alive (“I've got good news...you're alive!”), he or she might still need to work with you because of a fever or tachycardia (i.e. a fast heart rate).

In the same way, John wants to help these believers refocus in those fundamental areas, those areas that help describe the nature of eternal life, of new life in Christ. For example, look at the verses right before our main passage. John writes in 3:17-18...

But if anyone has the world's goods and sees his brother in need, yet closes his heart against him, how does God's love abide in him? [18] Little children, let us not love in word or talk but in deed and in truth.

All of us need these reminders. All of us need to refocus spiritually. God's words through John help us to do that. But there's one more reason John is writing this letter about 'verifying your vaccination'. In addition to reassuring believes, and refocusing them, he also writes...

Even the casual reader of this letter would pick up on John's deep concerns about false teaching that was circulating in this church (or in these churches). This is why he encourages them in 4:1...

Beloved, do not believe every spirit, but test the spirits to see whether they are from God, for many false prophets have gone out into the world.

He's even clearer about this threat in 2:26...I write these things to you about those who are trying to deceive you.

In every generation, our Enemy has snuck false teachers into the church, teachers who attempt to subvert and twist what God has said about faith in Christ and the nature of new life. And so for generations, huge numbers of people have wrongly reassured themselves that they are Christians.

But please hear me: all of that thinking is the result of false teaching. Those are not biblical grounds for assurance. Are there some pieces of the truth in there? Sure. But none of that lines up with what John is telling us here about genuine assurance; about real confidence that we are in Christ, by grace, through faith. And of course, all of those ideas, in one form or another, are still being promoted today.

So John is also writing in order to rebuke that kind of teaching. Why? Because if people who are really still sick and dying, believe they are healthy, or are being told they are “healthy”, they won't be looking for real help. They will be holding on to, and will eventually perish with, false assurances that they are right with God.

John wrote to rebuke false teachers, and to counter the influence of their teaching. Brothers and sisters, we need to make sure we understand what God has revealed about assurance, not simply for our own sake, but also for the sake of others. We need to be extremely careful about offering someone reassurance of redemption when that assurance is not clearly based on what God has revealed here. Sadly, while we believe we are helping, while we are attempting to encourage, we could in fact be leading them away from the truth.

III. Confidence is Both Possible and Powerful

Brothers and sisters, friends, in spite of the popular thinking that says, “Well, who can really know”, let me reassure you about reassurance: God's word says it is not only possible, but powerful. Listen to how many times in this letter, John repeats this aim of assurance:

If the 'superbug' scenario I described at the outset concerns you, how much more should the deadly disease of sin shock you and sober you and drive you to God's cure?

Yes, John was writing to give the spiritually vaccinated directions on verifying that they were truly immunized. But he was also writing to rouse those among his readers who were still sick. Remember, the NT tells us in many places that there will be people outside and inside the church who are mistaken, who are deceived about their true spiritual condition.

And that comfort of new life, and that confidence in new life, both flow from the same stunning reality. Look at I John 4:9, 10. John writes:

In this the love of God was made manifest among us, that God sent his only Son into the world, so that we might live through him. [10] In this is love, not that we have loved God but that he loved us and sent his Son to be the propitiation [i.e. the sacrifice of satisfaction] for our sins.

Let's give thanks to God for what He's revealed, and ask him to help us find the comfort and confidence He offers us in His love and in His vaccine, Jesus Christ. 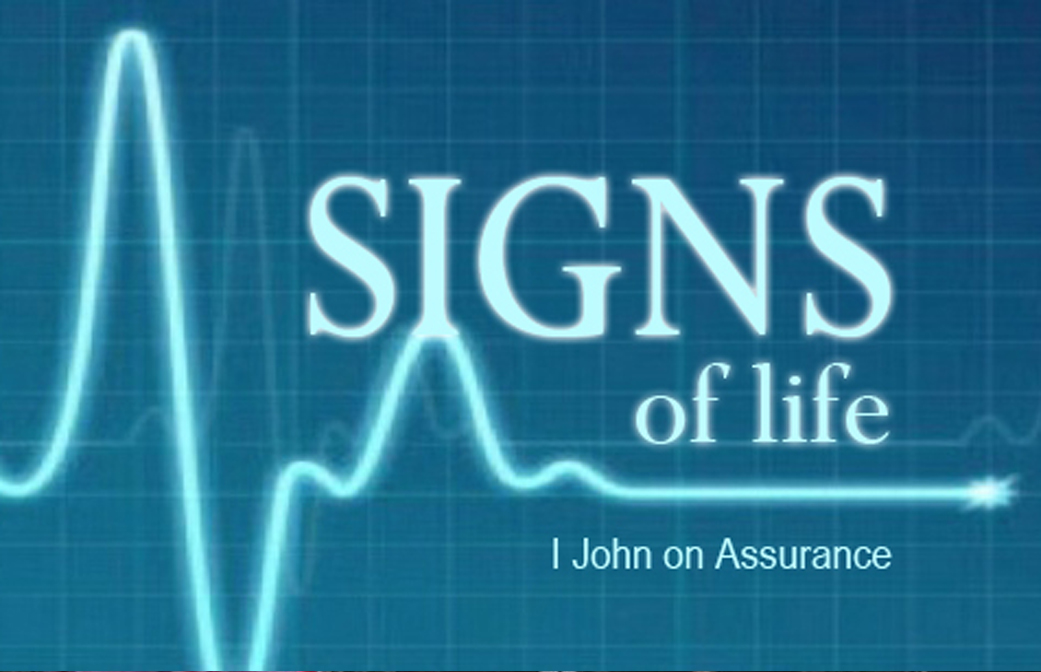 More in Signs of Life