A Diet of Humble Pie (Psalm 8)

I. It Ain't Trendy

In contrast to our society, listen to what God says about humility. And consider whether your estimation of humility reflects God's...

But this is the one to whom I will look: he who is humble and contrite in spirit and trembles at my word. (Isaiah 66:2)

He has told you, O man, what is good; and what does the LORD require of you but to do justice, and to love kindness, and to walk humbly with your God? (Micah 6:8)

But he gives more grace. Therefore it says, [in Proverbs 3] “God opposes the proud, but gives grace to the humble.” (James 4:6)

In the same way, the Apostle Peter also cites Proverbs 3:34...Clothe yourselves, all of you, with humility toward one another, for “God opposes the proud but gives grace to the humble.”
(1 Peter 5:5) And then, in the very next verse, Peter issues the command again, even more directly: Humble yourselves, therefore, under the mighty hand of God so that at the proper time he may exalt you... (1 Peter 5:6)

Humility may not be popular, but clearly, it is to be prized. But how do we “humble ourselves”? Where does humility come from? Well, one way we could answer that question is to talk about where the word “humility” comes from. “Humility” comes from the Latin word humilis, meaing ‘low’, which in turn comes from the Latin root humus, meaning ‘ground’ (it's also where get the word “human”). In terms of etymology (the study of word origins), the roots of this word paint a picture of someone bowing low to the ground.

But a far more important answer to this question, “Where does humility come from?” cannot be answered by etymology, but only by theology, that is, by the study of God. The great French pastor and reformer John Calvin affirmed this when he wrote, "Nothing but the pure knowledge of God can teach us humility." In light of that, turn over to Psalm 8.

Listen to what David writes and consider what he tells us here, what God teaches us here about the source, the wellspring of humility.

Before we dig into this psalm, let's start with a basic definition of humility, one drawn up in light of what the whole Bible teaches us about God and man. I think we can that...

Humility is an inner condition, springing from a true recognition of my proper position.

In the same way, the Bible, and Psalm 8 as an example, remind us of our proper position. To have a “true recognition” means to fully embrace in faith our proper position before God. Let's see how Psalm 8 bears this out. So first of all, I think we see her that...

If we jump down to verses 3 and 4, we can see this

When I look at your heavens, the work of your fingers, the moon and the stars, which you have set in place, [4] what is man that you are mindful of him, and the son of man that you care for him?

Notice where David is looking and notice how it makes him feel. He is looking to the night sky and he is feeling very, very small. As a shepherd, David must have had countless nights under the stars. As he looked at a very full night sky, as he watched the movements of the constellations and the phases of the moon, he was in awe of what God had made. And in the face of such grandeur, he wondered about the significance of teeny, tiny us.

The Eagle Nebula is 7000 light years away from Earth. It's tall pillars of hydrogen gas and dust were captured in famous images from the Hubble Space Telescope. Just one of those pillars, if we can call it that, measures three or four light years high. That's between 15-20 trillion miles. To give you a sense of how big that is, if you were to put a line of Earths, straight up this pillar from the top to the bottom, it would take 5 million of our planet to stretch from one end to the other. And this massive pillar is only one small part of a massive structure.

We are so tiny, aren't we? We are specks on the backs of germs on the bellies of mites on the necks of fleas on the massive, massive underbelly of the universe. And God made all of it, and that includes us. He is the Creator.

David marveled at just one example of God's mighty work, and that drove him to a true recognition of his proper position. God has Creator humbled David, and it that truth should do the same in us. But there's something else here. We also see that...

As David reflects on God as Creator by 'drinking in' the grandeur of what God has created, notice that his focus is not simply on himself as a part of creation, as a creature. More specifically he is thinking about himself as a blessed creature. Not only have we been created by God, but God is “mindful” of us; He “cares” for us.

What has God done for us? He has taken teeny tiny us and exalted us beyond comprehension. Look again at verses 5-8...

Yet you have made him a little lower than the heavenly beings and crowned him with glory and honor. [6] You have given him dominion over the works of your hands; you have put all things under his feet,[7] all sheep and oxen, and also the beasts of the field, [8] the birds of the heavens, and the fish of the sea, whatever passes along the paths of the seas.

Genesis 1 tells us that we were made in the image of God. And a large part of what that means is connected to the work God created us for: we were given dominion over the earth, to care for it; to steward it. And we were created with all of the skills and abilities and faculties and capacities to make that happen: to serve God, alongside one another, in the amazing work of caring for the earth.

This is what makes us absolutely distinct from every...every other part of creation!

Have you ever felt humbled by an incredibly generous gift from someone who was only an acquaintance? Did you ever see the show, Extreme Makeover: Home Edition? What was fascinating about that show were the reactions of people who were given a brand new house for free.

Now we know the editing of the show and the product placements and so much of it was carefully crafted, classic television. But the humbling of the recipients was real. They were so dumbfounded by such an overwhelming demonstration of giving.

Think about how much God has given you. You may not feel like it this morning, but you are blessed beyond measure, physically, financially, relationally, emotionally, and most of all, spiritually. We have been created by God and blessed by God, and those amazing truths should routinely humble us. But there's something else here. I think we can also say that...

In between the original blessedness in which we were created AND the blessings we currently enjoy a dark and disastrous shadow has fallen, hasn't it? And that shadow is alluded to in verse 2: Out of the mouth of babies and infants, you have established strength because of your foes, to still the enemy and the avenger.

Do you see the contrast there between “babies and infants” on one hand, and “the enemy and the avenger” on the other hand? The former represent weakness and humility. The latter represent human arrogance and self-assertion.

As the bookends of the psalm declare in verses 1 and 9, God's majesty, His might, His greatness is evident throughout all the earth. But not everyone will acknowledge this fact. God has (v. 2) foes...enemies. And in contrast to the “babes and infants”, they are characterized by pride. That which was made arrogantly standing against the One who made them.

While the psalmist rightly draws a line between himself and God's foes, he knew, and we know that all of us, all of us have fallen under the shadow of sin. Isn't the essence of sin the pride that leads us to see ourselves as the center of the universe, rather than particles in it, or to see ourselves as creators of our own destiny rather than creations of a great and awesome Creator? Doesn't that heart also lead us to take the blessings of God for granted?

And it is because of sin, all of us, apart from God's intervention, stand as God's foes; as His enemies.

...We also are men, of like nature with you, and we bring you good news, that you should turn from these vain things to a living God, who made the heaven and the earth and the sea and all that is in them. [16] In past generations he allowed all the nations to walk in their own ways. [17] Yet he did not leave himself without witness, for he did good by giving you rains from heaven and fruitful seasons, satisfying your hearts with food and gladness.” (Acts 14:15-17)

Humility is an inner condition, springing from a true recognition of my proper position.

So what's for dinner tonight? It should be warm, flaky, oozing “humble pie”. All of us desperately need a massive helping of humble pie, every day...in fact, every meal.

But we struggle with that menu because we are so often stuck in the mindset that the opposite of humble is only pompous and boastful and flagrantly arrogant. We struggle because we don't want to accept the more subtle expressions of pride. Pride takes many forms, and its most dangerous strains are the ones in which there is only the appearance of humility. The fourth century church leader Augustine wrote:

Humility is the foundation of all the other virtues. Hence, in the soul in which this virtue does not exist there cannot be any other virtue except in mere appearance.

So what does it look like to eat God's “humble pie”? If we tie it in to our original definition, we might say that eating God's “humble pie” means asking him to form in us that inner condition of humility, by using his word and our circumstances to give us a true recognition of His greatness and of our proper position as dependent creatures, as those deeply blessed, and as sinners in desperate need of grace.

But what happens, when we truly do live on a diet of humble pie? What does that look like? As I get older, I am coming to realize how much my diet really does affect me. When I am consume too much processed sugar, too many carbs, too much soda, etc. and when I am eating more than I need to feel full, I am sluggish. I get tired more quickly, I get achy, and I don't think as clearly. And of course, doctors and nutritionists can show us the science behind that exact lifestyle.

Over the course of the coming weeks, we are going to dig into God's word and talk about what humility really looks like in our everyday lives. It may not be trendy or trend-ing. Humility may not be cool or sexy. It may not be the “in” thing. But it is absolutely essential to experiencing real life, new life, God's life.

And we can only do that as we look to, and draw power from the One about whom it was written: And being found in human form, he humbled himself by becoming obedient to the point of death, even death on a cross. (Philippians 2:8) 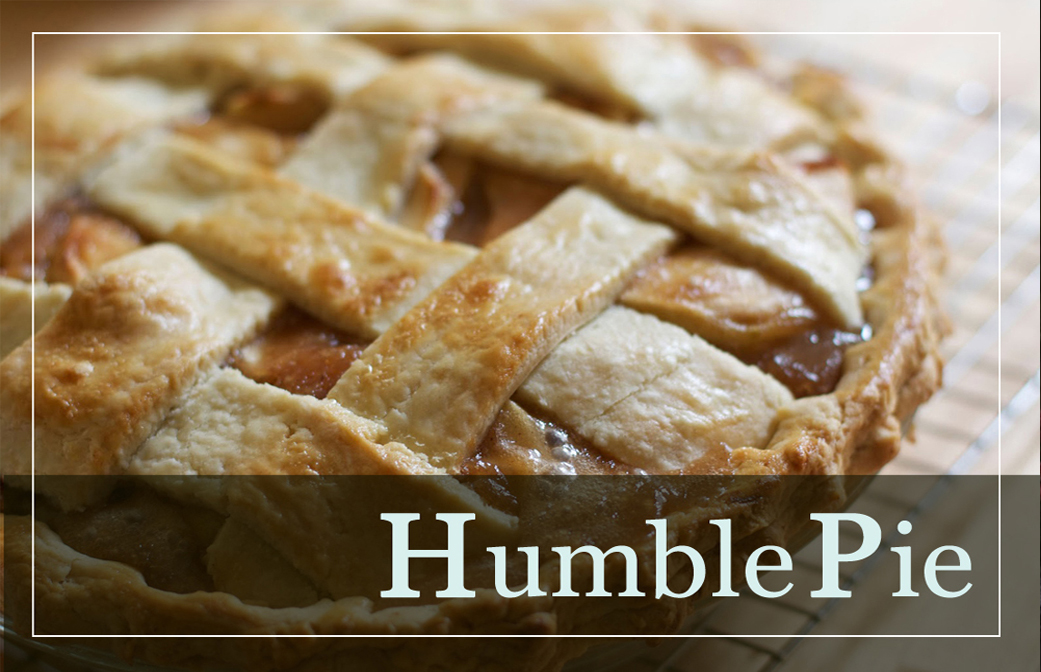