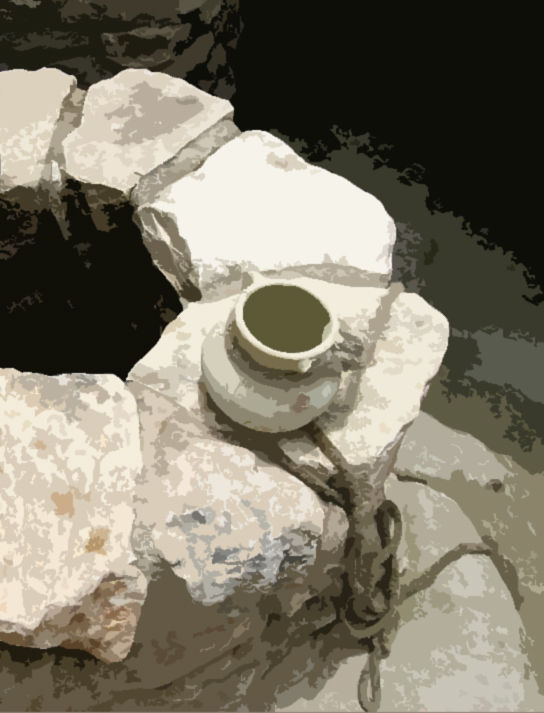 God, Not the Devil, is in the Details

At what seems like the conclusion of the story of Jesus and the Samaritan woman (recounted and preserved for us in chapter 4 of John's Gospel), the writer includes a small, but curious detail, one the casual reader might simply gloss over. After hearing from Jesus that he was in fact the long-awaited Messiah, John tells us in verse 28 that “the woman left her water jar and went away into town”. Since John the author was actually there, since he was, according to verse 27, one of the “disciples” who “came back” and “marveled that [Jesus] was talking with a woman,” it's appropriate to ask, “Why did this detail not only stand out to John at the time, but deserve mention in his accounting of events?”

In an attempt to answer that question I believe we simply need to look more closely at the context. For example...

It seems clear that Jesus became the most important thing to this woman. She had come to draw water from the well (v. 7), and as we all know, securing water is vitally important (especially before the invention of indoor plumbing). But when this woman, through eyes of faith, finally recognized “the gift of God, and who it [was] that [was] saying to [her], ‘Give me a drink,’” (v. 10), her 'to do' list radically changed. And so in that excitement, wonderfully, her water jar was left.

To go even further, I think it's also fair to say the water Jesus offered became important to this woman. Verses 11-15 confirm that, at first, the Samaritan woman was confused about “the living water” of which Jesus spoke. But her eventual zeal demonstrates that she really had come to recognize the uniqueness of what Christ was offering. Therefore, why be concerned about an actual water jar when you can be filled with the soul-quenching “gift of God” (v. 10) that comes through Christ alone?

We also discover in this account that telling others about Jesus became important to this woman. Why did she run off so quickly, leaving behind something as vital as a water jar? Consider her destination: she “went away into town and said to the people, 'Come, see a man who told me all that I ever did. Can this be the Christ?'” (vs. 28, 29) After encountering Jesus, it appears drawing in others became more of a priority than drawing up water from Jacob's well.

Finally, it's also obvious that getting back to Jesus became important to this woman. Why be concerned about a water jar when your intent is to return as soon as possible? That intention is clear from the woman's invitation to her neighbors, “Come”. Though she was physically distancing herself from Jesus for a time, her heart remained with him. I suspect it always would.

Based on what he included in his account, it seems reasonable to conclude that John provided this simple note about the woman leaving her water jar because that minuscule detail said so much about the massive work God had done (and was doing) in her heart. In the same way, I believe God has seen fit to preserve this detail for our encouragement, that we might be challenged and changed by the truth, not only the truth about Jesus, but about how an authentic encounter with Christ really does change us. Have the things that became important to this woman become important to you? Ask God even now to stir you, that even in the smallest details, and in the things left behind, your life will be undeniably marked by the Messiah.

Thank you for this message. It was a great reminder and encouragement.