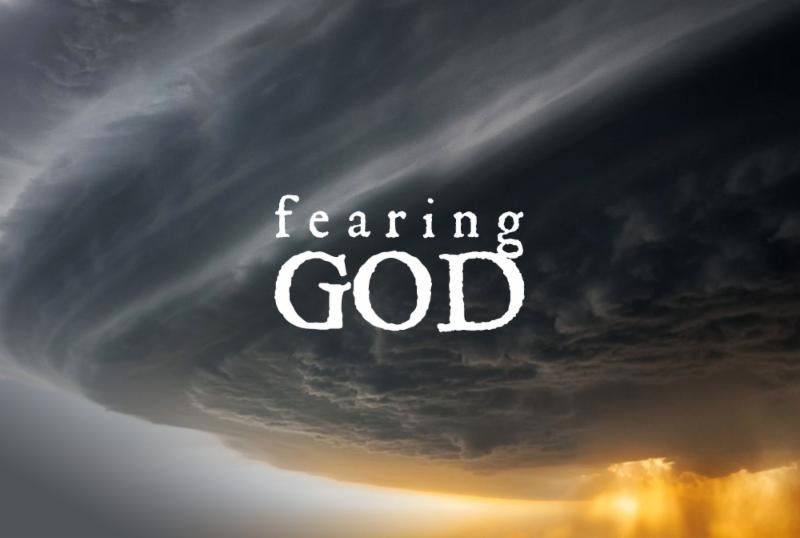 Quick question: What's your favorite praise song or hymn about fearing God? Struggling to come up with examples? You wouldn't be alone. Compared to songs about loving God or worshiping God, songs about fearing God are few and far between. And there's a good chance that poverty is also reflected in our prayers and preaching as well.

But why? Is the topic peripheral in our practice because the topic is peripheral in Scripture? Nope. In fact, quite the opposite is true. The main Hebrew word for fear, the word yaré, appears 435 times in the OT. Almost 350 of those occurrences, that is, almost 80% of those occurrences, are in reference to fearing God. And that's not factoring in the thirteen additional Hebrew words often connected with this topic; words like “terror”, “dread”, “dismay”, and “trembling”. But it's not just an Old Testament thing. The thread of fearing of God is also woven through the New Testament. The Apostle Paul writes:

Since we have these promises, beloved, let us cleanse ourselves from every defilement of body and spirit, bringing holiness to completion in the fear of God. (II Corinthians 7:1)

But again, why? Why do we neglect this important idea? I think the biggest stumbling block to this idea is the popular notion that fearing God is generally 'Zeusian' in its motivation, that is, that the God of Scripture is like that chief god of the Greeks: sitting on a heavenly mountain, eager to throw lightning bolts at sinners like us. Now combine that with another popular notion, that fearing God and loving God are incompatible. Granted, it would be strange for someone to love a deity who is only interested in squashing him or her like a bug under a boot.

But is that the God of the Bible?

A key difficulty in understanding this idea of “the fear of the Lord” is the difference between the Hebrew and English words. This difference is evident in a passage like Jonah 1. When God sends a storm to stop his stubborn and straying prophet, we read that the sailors were “afraid” (Hebrew, yaré)(v. 5) because the ship “threatened to break up”. But we also read in verse 10 that the men were “exceedingly afraid” (yaré) when Jonah revealed that he was running away from his God, “the God of heaven, who made the sea and the dry land.” (v. 9). Finally, when the sailors reluctantly throw Jonah overboard (per Jonah's recommendation!), we see the same Hebrew word used again, this time to describe the mariners' response to the newly calmed waters: Then the men feared the LORD [Yahweh] exceedingly, and they offered a sacrifice to the LORD and made vows.(v. 16)

Notice the evolution of the sailors' fear. It begins with fearing for their lives in light of the wind and the waves. Then their fear intensifies as divine judgment is factored into the mix. Finally, Yahweh becomes the object of their fear, and they respond, not with further worry, but with worship. Worship? Are they sacrificing as they cower? No. They aren't responding to any further danger, but to the fact they were spared. Their attitude seems shaped by gratitude.

Is this an isolated example? Not at all. This aspect of fearing God can be found throughout the Old Testament. For example, God declares through the prophet Jeremiah:

I will cleanse them from all the guilt of their sin against me, and I will forgive all the guilt of their sin and rebellion against me. [9] And this city shall be to me a name of joy, a praise and a glory before all the nations of the earth who shall hear of all the good that I do for them. They shall fear and tremble because of all the good and all the prosperity I provide for it. (Jeremiah 33:8–9)

If you, O LORD, should mark iniquities, O Lord, who could stand? [4] But with you there is forgiveness, that you may be feared.

Did you notice that these verses are not about God's power to punish, but about God's power to forgive and restore and bless? And there are many more Old Testament examples confirming this idea that what we might call informed fear (the fear we saw in Jonah 1:16), is informed by the whole character of God, by the perfection of his attributes, by his incomparable holiness, by the mind-blowing magnitude of everything that makes God God. This why David also exclaimed,

So the response described here is an appropriate response to the bigness of God; the 'overwhelming-ness' of God. But our English word “fear” has a tough time capturing all this, doesn't it? The word “fear” can capture how a sinner, a God-rejecting rebel, would respond in light of the 'overwhelming-ness' of God's justice, but not the overwhelming-ness of God's mercy or goodness, or to his perfections as Creator and Redeemer. Therefore, I think it's fair to say that this informed fear is best understood as involving what we might call awe.

Jonah chapter 1 also provides us with a helpful image when it comes to understanding this fear/awe: a storm. A thunderstorm is a demonstration of power, isn't it? The wind. The massive clouds. The lightning. The rain. The sound of thunder. But think for a minute about the different ways you might experience that storm. Watching a thunderstorm from a distant mountaintop (or from any safe distance) is an awe-inspiring experience. But what if you were on that mountaintop when the storm hit that mountaintop? Or what if you were in an airplane passing through that storm?

Did you know God is like that storm? And the power of his God-ness as God should drive each and every one of us to consider our spiritual position. Are you in a safe position, or an unsafe position spiritually?

Through the Good News about Jesus, every person can find that safe position in which we were made to flourish; that safe position from which to behold and to benefit from the awe-inspiring magnitude of God's majesty, the power of his perfections, his unrivaled God-ness as God. On the cross, Jesus Christ took the storm's fury for us. Jonah was cast into the sea because he was guilty. Jesus threw himself into the sea of God's wrath as one who was perfectly innocent. But he did it because we were and are guilty. He did in it love. He did it to save us.

Those awe-inspiring truths about Jesus should inspire in us a gospel-informed fear. Let's be clear, there is no life without fear. Either the fear of God will rule you, or some other fear will take its place. If biblical fear truly involves things like awe and worship, then we have to acknowledge that we were made to do those very things, but with God as our focus. And when God is not our focus, then we will fear/worship/tremble before other things. That is what the Bible calls idolatry. And in the end, our idols will fail us in the face of the Storm.

But when we are, by grace, through faith, in Christ, we can walk with God, with a gospel-informed fear, beholding and benefiting from his greatness. How could we, why would we, ever forget a truth as beautiful as that?

What an great topic and thank you again for teaching us in this area.