I. Claiming to Be

How might you verify that someone is who they claim to be? If someone came to your door claiming to be a police detective, how would you verify his or her identity? Maybe you would ask to see his badge and ID. But couldn't those be fake? Sure. What if someone came and claimed to be your long lost relative, maybe a sibling or a parent. How would you know? You would probably ask for some proof, right? Maybe even a genetic test. How might you know? Keep that in mind as we return to our study for April, “4 Easter”.

Last time, I mentioned at least four reasons Easter should be your favorite day, and we began by talking about how, for believers, Easter was the day we were freed from slavery (at least, the day our freedom was secured). Let's look now at a second reason.

Reason #2: Easter should be your favorite day because it's the day we received the most powerful testimony of Jesus as Lord.

Paul, a servant of Christ Jesus, called to be an apostle, set apart for the gospel of God, [2] which he promised beforehand through his prophets in the holy Scriptures, [3] concerning his Son, who was descended from David according to the flesh [4] and was declared to be the Son of God in power according to the Spirit of holiness by his resurrection from [lit. from among] the dead, Jesus Christ our Lord...

So let me do this: let me use three key words from this passage to help you understand what Paul is telling his readers.

First, the word “gospel”. Paul tell us that, as “an apostle”, he has been “set apart for the gospel of God”. Remember, gospel simply means “good news”. So what kind of good news is this? It's good news that was (v. 2) “promised beforehand through [God's] prophets” in the OT.

If we wanted to learn more about the good news or “gospel” Paul preached, we could look at a passage like I Corinthians 15. Paul writes there in verse 1: Now I would remind you, brothers, of the gospel I preached to you, which you received, in which you stand... He then goes on to unpack this in verses 3 and 4...

It's that description that leads us to a second keyword in Romans 1:1-4. It's the word...

Not only is this gospel focused on the death and burial of Jesus, but also the fact that “he was raised on the third day”. And in Romans 1:4, Paul brings us to that climactic event. Paul points us to Easter. Paul understood how central the resurrection was to the Christian message and the reality of our hope. Back over in I Corinthians 15 he put it this way:

But why does Paul emphasize the resurrection in Romans 1:4? That takes us to keyword #3...

Notice how Paul, once he mentions God's “Son” in verse 3, immediately goes on to tell us about his lineage: that he “was descended from David according to the flesh”. Yep, King David; the one who took down Goliath. Now, this is the not the first time Paul has talked about both David and the resurrection of Jesus. In his very first recorded sermon (or evangelistic message), Paul emphasized this connection between Jesus, David, and the resurrection. After making it clear that Jesus was a descendant of David in Acts 13:22, 23, Paul goes on to describe how “God raised him from the dead” in verse 30. But listen where he goes next in verses 32 and 33...

And we bring you the good news that what God promised to the fathers, [33] this he has fulfilled to us their children by raising Jesus, as also it is written in the second Psalm, “‘You are my Son, today I have begotten you.’”

That's verse 7 of Psalm 2, a psalm all about the Messiah. In the previous verse (Psalm 2:6) we read God's statement, “As for me, I have set my King on Zion, my holy hill.” So while Psalm 2 may refer to any of David's descendants who served as king over Israel, Paul tells us that Jesus has ultimately fulfilled verse 7... “You are my Son, today I have begotten you.” On what day was Jesus “begotten”? According to Acts 13:33... on Easter! But wait a minute. Is Acts 13:33 saying that Jesus only became God's Son after he rose from the dead?

Not exactly. The Scriptures are clear that before the human being Jesus existed, that is, before the Incarnation, he was and has always been God the Son. What's helpful about Acts 13 is that it points us back to David, which reminds us how the title “Son” was first revealed as a messianic title. This comes directly from God's covenant with David, as recorded in II Samuel 7:

When your days are fulfilled and you lie down with your fathers, I will raise up your offspring after you, who shall come from your body, and I will establish his kingdom. [13] He shall build a house for my name, and I will establish the throne of his kingdom forever. [14] I will be to him a father, and he shall be to me a son. (II Samuel 7:12–14)

That's why Psalm 2 says what it says about God's newly installed king, “You are my Son”. So according to Paul, the fullness of God begetting his Messiah is not some elaborate coronation ceremony. It is when that descendant of David rises from the dead. This is why Peter, earlier in Acts, makes this statement after also emphasizing Christ's resurrection:

“Let all the house of Israel therefore know for certain that God has made him both Lord and Christ, this Jesus whom you crucified.” (Acts 2:36)

Now, equipped with that knowledge, listen again to Paul's statement in Romans 1:

Paul, a servant of Christ Jesus, called to be an apostle, set apart for the gospel of God, [2] which he promised beforehand through his prophets in the holy Scriptures, [3] concerning his Son, who was descended from David according to the flesh [4] and was declared to be the Son of God in power according to the Spirit of holiness by his resurrection from the dead, Jesus Christ our Lord...

Based on all this, I believe what God has revealed here is that the resurrection of Jesus was and is the most powerful testimony of Jesus' distinct and divine identity. He is, without a doubt, the “Son of God in power”; the King of Kings and Lord of Lords. As the risen Jesus declared to his disciples, “All authority in heaven and on earth has been given to me.” (Matthew 28:18)

Yes, Jesus taught and spoke like no other person. Yes, Jesus performed many miracles. Yes, he even raised people from the dead. But when you claim to be giving your life “as a ransom for many” (Mark 10:45), when you claim that others will one day see you as “the Son of Man seated at the right hand of Power and coming on the clouds of heaven” (Matthew 26:64), when you claim that you are “the resurrection and the life” (John 11:25), as well as “the way, and the truth, and the life” and that “no one comes to the Father except through you” (John 14:6), you cannot be killed on a criminal's cross and then stay dead.

But if you don't stay dead, if you do what no one else has ever done, if you beat (not cheat, but beat) death, and rise up, glorified, never to die again, then there is no greater validation; no greater confirmation... attestation... verification of who who you've claimed to be. How could anyone, when confronted with something as serious as his resurrection from the dead, not take the claims of Jesus seriously? Any honest person cannot.

And so what do we do with this 'Easter declaration'? (“and was declared to be the Son of God in power according to the Spirit of holiness by his resurrection from the dead”)

What do we do with this declaration now, if we are among those who believe? Well, like last time, I think it should inspire a couple questions:

First, ask yourself this: “Is there something Jesus still needs to prove to me?” Based on everything we've seen in regard to the resurrection, I think all of us should say “no”. But it is very easy for us to slip into a different mindset, even if we don't recognize it or won't acknowledge it for what it is.

What kind of mindset am I talking about? I'm talking about what we expect from God. When our expectations of God are based on the world rather than the word, on our wants rather than God's will, on our flesh rather than our faith, it is very easy to slip into that subtle trap of, “Jesus, I need you to prove that you're going to take care of me; that you're really here; that I can trust you in this or that way.”

Brothers and sisters, friends, Jesus doesn't have to prove anything to you or anyone. By His grace, God has seen fit to declare or demonstrate the 'Messiah-ship', the lordship of Jesus, through many evidences; most clearly through Christ's resurrection from the dead. That really is enough for us in terms of reassurance that Jesus is who he claimed to be.

If we believe Jesus is the rightful king over all things, including us, then we will serve him as such. Not that any of us can do that perfectly, but surrender should be the trajectory of our lives. Surrender should be our daily disposition, right? If God has powerfully testified to the power of Jesus, then why are we so tempted by earthly offers of power and control? If God has powerfully testified to the “Son of God in power”, shouldn't that persuade us that God has power for us to live very different lives (even if that means today, just the power to put one foot in front of the other)? Paul connected these 'dots' of power in Ephesians 1:19–20...

[He wanted his readers to know] what is the immeasurable greatness of his power toward us who believe, according to the working of his great might [20] that he worked in Christ when he raised him from the dead and seated him at his right hand in the heavenly places...

Stunningly, but wonderfully, that power is available to you this morning. And that's confirmed by God's powerful testimony in raising Jesus from the dead. Power to surrender. Power to follow. Certainly there isn't any other leader or movement or cause or philosophy that has been validated in the way or to the degree Jesus has been validated. Who or what else has beaten death? Therefore, who or what else is worthy of our undying allegiance? Brothers and sisters, let's embrace Easter as our favorite day and then live in light of these things today, reassured by the resurrection.

And if you have never surrendered to Christ, that is, trusting that he is who he has claimed to be, and can do what he has promised, then today is the day. Make Easter your favorite day as you embrace God's 'Easter declaration'. He stood in our place, to bear the penalty for our sins, so that we could also stand in that place of new life with him. Let's take time to talk with God about our hearts, in light of the powerful validation provided for us through Christ's resurrection. And as we do, let's give thanks that we can know Jesus is exactly who he claimed to be. 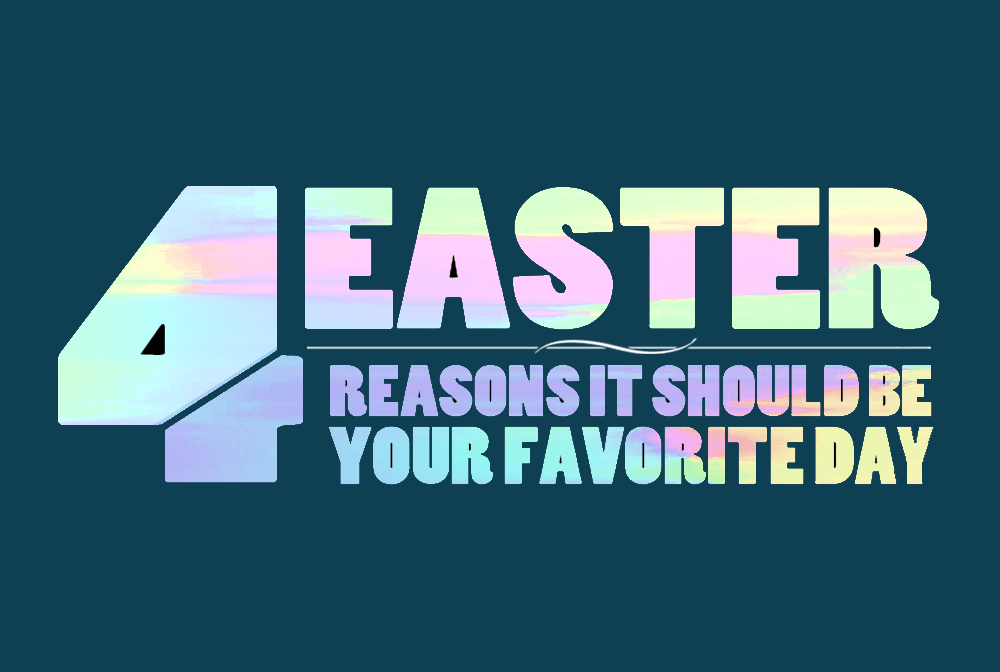 Easter and Transformation (I Corinthians 15:20-23)