Topic: Christmas, One Lord: So Great a Salvation Passage: Psalm 145:14

I. A Hard Yeard

Do you feel beaten down by the past eight or nine months?

If you do, you aren't alone. A headline from just a few weeks ago read, “Mental Health Providers See “Unprecedented” Surge During Pandemic: [the subtitle revealed] At one Chicago-based clinic, referrals to their counseling program have increased 75%.” A Scientific American article from November 17th was entitled, “The Surprising Mental Toll of COVID”. One state website listed several hotline numbers that residents could call, along with this encouragement: “The coronavirus (COVID-19) outbreak is changing life for all of us. You may feel anxious, stressed, worried, sad, bored, depressed, lonely or frustrated in these circumstances. You’re not alone.”

All over the country, men and women, boys and girls, are grappling with unique stressors related to a variety of disruptions like job loss or vocational transition, financial hardships, educational changes, relational restrictions, medical challenges, political divisions over the pandemic, and continued uncertainty in many, many areas. For some, the virus has been even more costly: the loss of a loved one (maybe even, as I heard about this week, the loss of a child). In fact, just this past Wednesday, the U.S. recorded the most COVID deaths ever in one day: 2804.

Of course, our nation has dealt with very difficult disruptions in the past: wars, natural disasters, terrorist attacks, and yes, even pandemics. You may know that just over a hundred years ago almost 700,000 Americans were killed during the Spanish influenza pandemic of 1918.

But the reality of other hard times (in some cases, even harder times) doesn't necessarily change the challenges we face today; for those feeling beaten down by 2020, such knowledge doesn't magically lift the heaviness. So... what can we do? What help, what healing, what hope is available for people like us... in a year like this one?

Well, as the people of God, we know the answer to that question. We... can go to God.

Let's do that by turning over to Psalm 145. Scan down to v. 14 and listen to the encouragement the writer—in this case, King David—gives to those feeling beaten down. He writes...

But who is this verse for? To whom is the writer speaking? In what situations does this apply?

Those are the questions we should be asking, especially since we are taking just one verse out of a much larger psalm. To answer our questions, we need to consider what this psalm tells us about the God who “upholds” and “raises up”. For example, several other verses in this psalm reveal that...

When you read Psalm 145 from the beginning, there's no doubt that this psalm describes a God who is powerful enough to “raise up” those who are beaten down. How powerful? Verse 3 declares, Great is the LORD, and greatly to be praised, and his greatness is unsearchable.

Verses 4-6 speak in worshipful terms as they talk about God's “works” and his “mighty acts”. They are also called his “wondrous works” and “awesome deeds”. Do you see that? So the God about whom David writes is not simply great and mighty, he's also revealed his greatness and might in powerful and amazing ways in the past; ways that inspire worship and witness.

But as we approach our main verse, we discover this exclamation in verse 13. Look at it:

Your kingdom is an everlasting kingdom, and your dominion endures throughout all generations.

The God of this psalm, the God of THE psalms, the God of David, the God of Israel, hasn't simply exercised power in isolated ways in sporadic episodes throughout history. No. His power is always at work as he reigns over all creation, from generation to generation. That astounding truth brings us to another truth about this God...

How do we know God is willing to use his great power for good? Well, just look at verses 8–9. David tells us that...

The LORD is gracious and merciful, slow to anger and abounding in steadfast love. [9] The LORD is good to all, and his mercy is over all that he has made.

Look at how much is revealed about God's character in those two verses: He is a “gracious” God. He is a “merciful” God. He is wonderfully patient and consistently loving. He is truly “good to all” and merciful “over all that he has made”. If we drop down just past our main verse, David gives us an example of this goodness and mercy to all in Psalm 145:15–17...

The eyes of all look to you, and you give them their food in due season. [16] You open your hand; you satisfy the desire of every living thing. [17] The LORD is righteous in all his ways and kind in all his works.

God is not simply kind and merciful in a big, broad, 'take care of the universe' kind of way. Look at verses 18-20 of this psalm...

Look at how David moves from what seem like massive miracles, the “wondrous works” and “awesome deeds” of verses 4-6, to now personal stories of redemption. This is not what God might do. This is what God has done. He's near. He satisfies. He hears. He saves. He preserves. He is an experienced Savior! And, of course, as we see in our main verse, verse 14, he “raises up all who are bowed down”. And as he raises us up, David provides this direction in Psalm 55:22... Cast your burden on the LORD, and he will sustain you...

So this psalm may have been written three-thousand years ago to the people of Israel, but as we've seen, it simply describes how and who God is, not simply how and who he was in ages past. He was, but I believe he still is, the God who “raises up” those who are beaten down.

III. The God of Psalm 145 & The Christ of Christmas

So how can I be sure that the God of David, the God of Psalm 145, verse 14, is available to us today; available to those who have been beaten down by 2020; that is He is willing to uphold you and raise you up? Well... because of Christmas. Listen to this simple and straightforward verse about Christmas. Paul writes...

The saying is trustworthy and deserving of full acceptance, that Christ Jesus came into the world to save sinners, of whom I am the foremost. (I Timothy 1:15)

Many of us have been longing for months for the holiday season to roll around because, now more than ever, we're hungry for some Christmas cheer, right? How many put up their decorations or started playing Christmas music or watching holiday movies early because they wanted to lift their spirits? But in I Timothy 1:15, Paul reminds us that ultimately, Christmas cheer flows from the fact that God saves.

First, the Christ of Christmas makes God's promises ours by grace through faith. Paul expresses that idea like this in II Corinthians 1:19–20...

For the Son of God, Jesus Christ, whom we proclaimed among you, Silvanus and Timothy and I, was not Yes and No, but in him it is always Yes. [20] For all the promises of God find their Yes in him. That is why it is through him that we utter our Amen to God for his glory.

Second, the baby laid in the manger became the man who died for us, to reconnect us with the God of Psalm 145. Another apostle, Peter, wrote: For Christ also suffered once for sins, the righteous for the unrighteous, that he might bring us to God... [that is, to the God of the Bible, to the God of Israel] (I Peter 3:18)

Third, the one who fulfilled the Christmas prophecies now fulfills all Scripture for us. What does that mean? Paul explained it this way in Romans 15:4...

For whatever was written in former days [like Psalm 145] was written for our instruction, that through endurance and through the encouragement of the Scriptures we might have hope.

When Psalm 145:14 was written to God's people three-thousand years ago, it revealed the same God who reigns over his people today through Jesus. The difference of course is that Jesus, the Righteous One, has become the guarantee of those promises for sinners like us.

So... if you feel beaten down by 2020, I have great news for you. Yes, there is Christmas cheer available to you this season, the kind that comes from cards and candy canes, from music and movies, from wreaths and wrapping presents. Those are all good things, aren't they? But the really great news, the greatest news is that for those who feel beaten down by a very hard year, there is a God who “raises up all who are bowed down”; and that God is ours through Jesus!

How does God raise us up when we are burdened and bowed down? By taking away our suffering? Yes... but not necessarily right away. Listen to how Peter encourages his readers in terms of God lifting us up, and listen for echoes of the Psalms in these verses...

Humble yourselves, therefore, under the mighty hand of God so that at the proper time he may exalt you, [7] casting all your anxieties on him, because he cares for you.... [10] And after you have suffered a little while, the God of all grace, who has called you to his eternal glory in Christ, will himself restore, confirm, strengthen, and establish you. [11] To him be the dominion forever and ever. Amen. (I Peter 5:6–7, 10-11)

But wonderfully, we've heard about another option this morning. Because Christ came into our world at Christmas, you can, when you feel beaten down, look to a God who is able, who is willing, and who has proven he knows how to raise up those who have been laid low.

Again, how does he do this? As Peter indicated, he does this by reassuring you that he cares; that when you humbly entrust yourself into his mighty hand, in the midst of your suffering, not only will he shoulder your anxieties, but will, “at the proper time”, restore, confirm, strengthen, and establish you. Why? Because He has “called you to his eternal glory in Christ”.

I believe most of you have already been called, and have responded with faith. But maybe others of you are just now experiencing that calling. Will you respond in faith this morning? Faith in the Christ of Christmas? Trust that only he can give you that ultimate Christmas cheer, a joy that isn't simply seasonal, but that will last the whole year through? If you have been beaten down by the difficulties of this year, will you respond with a worldly, with a fleshly response? Or will look to Jesus with faith, praying specifically in light of Psalm 145:14. Because Christ was laid low for us, we can be raised up through him. What good news! Let's take a minute to talk to God now about feeling beaten down and how we need him to raise us up. 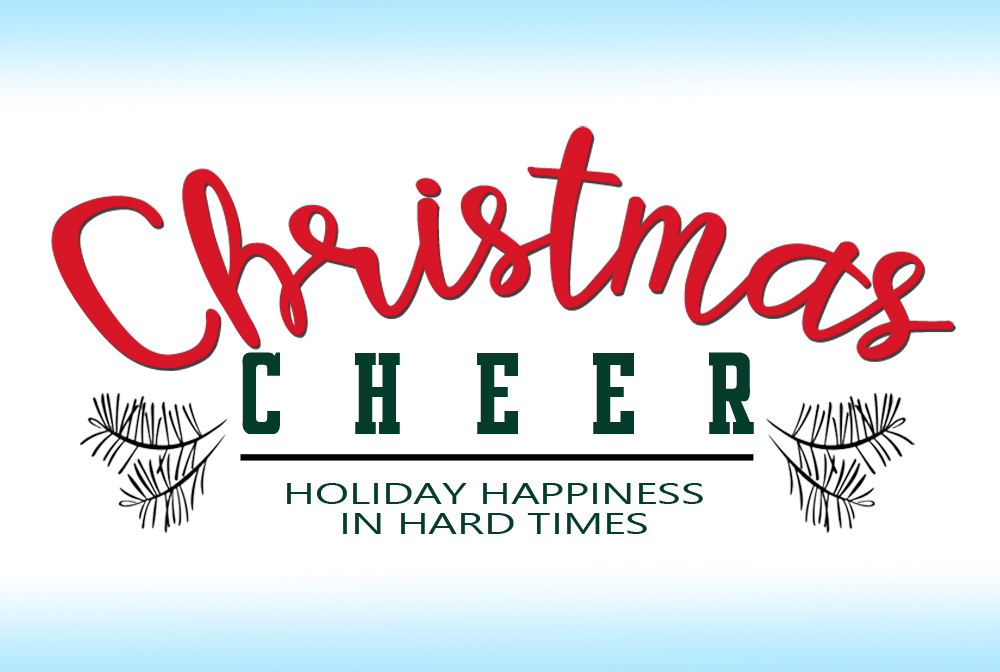 When You're Turned Around (Philippians 1:6)