Topic: Easter, One Lord: So Great a Salvation Passage: Ephesians 2:6

I. How Does the Past Influence the Present?

Listen to how the Apostle Paul argued for the importance of the bodily resurrection of Jesus against those who denied that human bodies could actually be raised...

And if Christ has not been raised, then our preaching is in vain and your faith is in vain. [15] We are even found to be misrepresenting God, because we testified about God that he raised Christ... [17] And if Christ has not been raised, your faith is futile and you are still in your sins. [18] Then those also who have fallen asleep in Christ have perished. (I Cor. 15:14-15, 17-18)

Paul understood that the resurrection of Jesus was the gospel's linchpin. A resurrection-less Christianity simply isn't Christianity, and if it were somehow, it wouldn't be worth believing. That's how deeply Christ's past influenced the Corinthians' present.

Paul would later tell the disciples in Rome, “if you confess with your mouth that Jesus is Lord and believe in your heart that God raised him from the dead, you will be saved.” (Romans 10:9)

But what about your present? How is your present, your right now, influenced by Jesus' past? Over the last couple of weeks we've been talking together about the importance of resurrection. And we've done this by looking at a number of verses from God's word, verses that all include the keyword raised. Let's continue that study this morning by looking together at Ephesians 2.

Actually, before we consider Ephesians 2, let's back up a chapter and think about how Ephesians 1 helps the lay the groundwork for what we find in chapter 2.

...[that you may know] what is the immeasurable greatness of his power toward us who believe, according to the working of his great might [20] that he worked in Christ when he raised him from the dead and seated him at his right hand in the heavenly places, [21] far above all rule and authority and power and dominion, and above every name that is named, not only in this age but also in the one to come.

As we talked about last time, we are reminded here that the very first way Jesus' past should radically influence our present, the first way the resurrection should radically change you, is that it drives you to acknowledge that Jesus is the King of Kings. He was both “raised... from the dead” and “seated... at [God's] right hand”. He is the Messiah. He is God's anointed king and chosen deliverer; and his resurrection proves his identity. Sure, someone claiming to be “the way, the truth, and the life” (Jn. 14:6) sounds a little out there. But I would think that if someone beat death, it would not only get our attention, but it would persuade us in regard to such claims.

But also notice how these declarations about Jesus are set in the context of a prayer. And that prayer is for the Christians in Ephesus, that they would “know” (v. 18) “the immeasurable greatness of [God's] power toward us who believe”. Paul goes on to tell us that this “power toward us” is “according to the work of [God's] great might”. And that “great might” is directly connected here to God's powerful work of raising Jesus from the dead and seating him in the heavenly places. Do you see that?

That's another connection between Jesus' past and the Ephesians' present. But what exactly does Paul mean? How do we see this great “power” and “might” manifest in “us who believe”?

Well, that drives us forward to our main text, chapter 2, verse 6. Let me begin reading in verse 4, so we can get a better sense of the context here. Ephesians 2:4...

But God, being rich in mercy, because of the great love with which he loved us, [5] even when we were dead in our trespasses, made us alive together with Christ—by grace you have been saved—[6] and raised us up with him and seated us with him in the heavenly places in Christ Jesus, [7] so that in the coming ages he might show the immeasurable riches of his grace in kindness toward us in Christ Jesus.

If you look back at the very first verse of chapter 2, you'll see that Paul starts precisely where we started with this series; by talking about death. But remember what we said about death. In contrast to how the world thinks about death, we discovered that...

In our last lesson, we looked at how the bodily resurrection of Jesus of Nazareth dealt directly with the dilemma of physical death. And as we saw in chapter 1, that historical reality is also the foundation we find here in Ephesians. But as 2:1 makes clear, Paul is now talking about how Jesus' resurrection also dealt with that second aspect of death; what we might call 'spiritual death'. In a sister book to Ephesians, Paul described this same incredible connection...

...having been buried with him in baptism, in which you were also raised with him through faith in the powerful working of God, who raised him from the dead. (Colossians 2:12)

Christians are those who have been “raised with [Christ] through faith”. Writing to the believers in Rome, Paul stresses this same idea...

We were buried therefore with him by baptism into death, in order that, just as Christ was raised from the dead by the glory of the Father, we too might walk in newness of life. (Ro. 6:4)

Brother, sister, friend, are you walking in that “newness of life”, in the power of Easter every day? But what exactly does that look like? Well, listen again to Paul's teaching in Romans 6...

We know that Christ, being raised from the dead, will never die again; death no longer has dominion over him. [10] For the death he died he died to sin, once for all, but the life he lives he lives to God. [11] So you also must consider yourselves dead to sin and alive to God in Christ Jesus. (Romans 6:9–11)

If the spiritual death of Ephesians 2:1 meant that we, as sinners, were spiritually dead to God, cut off from the blessings of God's Spirit, then walking today in the resurrection life of Jesus must mean that we now have power to live a life that is “dead to sin and alive to God in Christ Jesus”. Talk about the past influencing the present!

But let's not forget, Paul spoke about Christ-followers not only being “raised”, but also being “seated” with Christ “in the heavenly places”. Okay. Wait a minute. What is Paul talking about? I'm here. You're here. How can we also be in “heavenly places”? Good question. We understand what it means for Jesus to be seated at God's right hand. But how are we also seated in God's presence?

I think a key to understanding this idea is found in Colossians 3:3, where Paul reminds those disciples that “you have died, and your life is hidden with Christ in God.” That matches up with Ephesians 1 and 2, doesn't it? If Christ is seated, I am seated. Why? Because my newly raised life is “hidden with Christ in God”. We are “in him” by faith. Therefore, we are (Romans 8:17) “fellow heirs with Christ”. We share the heavenly blessings that Jesus has made possible, what Paul calls in Ephesians 1:3, “every spiritual blessing in the heavenly places”.

And this directs us toward the future as well. Think about what we heard in Ephesians 2:7. Why has God poured out the “immeasurable greatness of his power toward us who believe”?

...So that in the coming ages he might show the immeasurable riches of his grace in kindness toward us in Christ Jesus. (2x)

Let that sink in for a moment. Let that humble you. Let that comfort you. Allow that glorious truth to inspire you.

But all this also has very practical implications for how you live your life. Going back to Coloss-ians 3, in the very first verse of that chapter, we again find the words “raised” and “seated”. Listen to how Paul instructs believers in light of these resurrection realities. Colossians 3:1...

If then you have been raised with Christ, seek the things that are above, where Christ is, seated at the right hand of God.

Being raised with Jesus and seated with Jesus by God's power through the resurrection of Christ should cause us to walk with a new, “above” mentality, not in that old, “below” blindness. That means caring about God's priorities; walking by Christ's pattern; loving God's people, practicing his presence... all the things Paul goes on to describe in Colossians 3.

In our last lesson, we talked about how God's incomparable power and inviolable plan, the power and plan God prepared for his Messiah, those things will also be at work in the lives of everyone who belongs to Jesus through faith.

Brothers and sisters, friends, that is what Paul's been explaining to us this morning; how the resurrection of Jesus then, makes possible your resurrection today. In defeating death, Jesus not only beat physical death, but he also rescued his people from spiritual death. And that same resurrection power that produced an empty tomb can also create a full heart, as God's Spirit now dwells inside all who believe, bringing new life where death once reigned.

Think for a moment about the “immeasurable greatness of his power toward us who believe”. Consider “the working of his great might” in your life. Savor that idea of being “seated”. As you do that, you may find yourself asking, “If Jesus' resurrection in the past means power for me in the present... why do I feel so weak? If his resurrection life has brought me life, why do I feel stuck in my old ways? If I am really seated above, why do I feel so restless below?”

Well, I'm not sure I can answer that question for you personally. For some of you, a new birth really hasn't taken place yet. Though you claim the title, “Christian”, you don't really belong to Christ. For others, though God has made you alive together with Jesus, you are distracted by the world and neglecting God's means of grace (e.g. His word, prayer, fruitful fellowship). For others, you're fighting with God about an area of your life in which he is calling you to surrender.

And there are, of course, other ways we can begin to choke-off the resurrection life God makes available to us. That possibility is the very thing that prompted Paul to write to these churches 2000 years ago. So what can we do? Well, be encouraged. Wherever you are, no matter how far you feel from God, he is always one step away.

Will you turn this morning and, in faith, take a step toward God? Acknowledge that weakness. Acknowledge the old. Acknowledge your restlessness. Ask him for the resurrection power He sacrificed his Son to give you. Be raised! Live as those raised! Our world desperately needs to see that power. They need to hear that resurrection life is freely available in a disease-ridden world like this one. Remember, “by grace you have you been saved”.

Whoever you are, wherever you are, whatever you've done... it all starts with prayer. Let's do that now, emboldened by the promise and reality of resurrection. 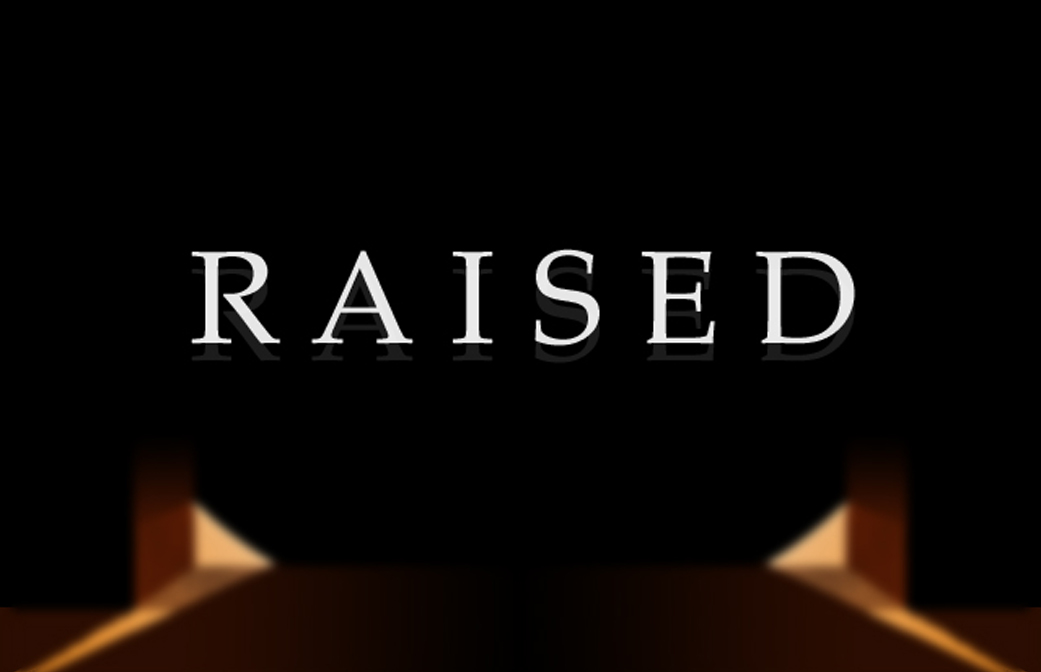