Firm in the Face of Fear (Daniel 3)

Topic: One Mission: Through Many Tribulations Passage: Daniel 3:1–3:30

I. A Right Response?

When it comes to the current crisis, some people may ask questions like, “How are you feeling?” or “Do you know anyone who's sick?” or even, “Do you have any extra toilet paper?” But here's my question to you: “Overall, how have you been responding to this crisis?”

But is there a right and wrong? We do face a unique crisis in terms of our lifetime, but we also know it could be much worse. And yet, a pandemic is still a very serious thing, right? So... how should we respond?

Did you know that more important than the crisis itself or how to get through it is how the experience itself can and should shape your faith. Life is a full of crises, isn't it... some big, some not so big... but they all feel very hard as they happen. So what can we learn from this crisis that may help us in future challenges? What might God want you to know about your response?

Grab a Bible if you don't already have one and turn to Daniel 3. Before we read this famous story, let me give you a little info about the historical context of this story. The time is the late 7th century before Christ. The location is Babylon, which is in modern day Iraq. In addition to the native Chaldeans, many Jews had been exiled from Israel and were now living in captivity in Babylon (some that had even been promoted to 'managerial;' positions). Let me begin by reading from verses 1-7. For the sake of time, let me simplify these opening verses a bit (feel free to go back and look at the skipped terms). We read...

King Nebuchadnezzar made an image of gold, whose height was sixty cubits and its breadth six cubits. He set it up on the plain of Dura, in the province of Babylon. [2] Then King Nebuchadnezzar sent to... all the officials of the provinces to come to the dedication of the image... [3] ...all the officials of the provinces gathered for the dedication… And they stood before the image that Nebuchadnezzar had set up. [4] And the herald proclaimed aloud, “You are commanded, O peoples, nations, and languages, [5] that when you hear the... music, you are to fall down and worship the golden image... [6] And whoever does not fall down and worship shall immediately be cast into a burning fiery furnace.” [7] Therefore, as soon as all the peoples heard the... music, all the peoples, nations, and languages fell down and worshiped the golden image that King Nebuchadnezzar had set up.

Now at first, this doesn't sound like a story involving some kind of crisis. Sure, falling down and worshiping a huge golden statue sounds extremely weird, and Nebuchadnezzar seems extremely controlling and extremely harsh, but it doesn't look like anyone is facing a crisis here... unless, of course, someone was not willing to comply. That leads us to vs. 8-15...

Therefore at that time certain Chaldeans came forward and maliciously accused the Jews. [9] They declared to King Nebuchadnezzar, “O king, live forever! [10] You, O king, have made a decree, that every man who hears the... music, shall fall down and worship the golden image. [11] And whoever does not fall down and worship shall be cast into a burning fiery furnace. [12] There are certain Jews whom you have appointed over the affairs of the province of Babylon: Shadrach, Meshach, and Abednego. These men, O king, pay no attention to you; they do not serve your gods or worship the golden image that you have set up.” [13] Then Nebuchadnezzar in furious rage commanded that Shadrach, Meshach, and Abednego be brought. So they brought these men before the king. [14] Nebuchadnezzar answered and said to them, “Is it true, O Shadrach, Meshach, and Abednego, that you do not serve my gods or worship the golden image that I have set up? [15] Now if you are ready... to fall down and worship the image that I have made, well and good. But if you do not worship, you shall immediately be cast into a burning fiery furnace. And who is the god who will deliver you out of my hands?”

Did you notice that verse 8 tells us that it was the Jews who were “maliciously accused” in terms of not worshiping the king's golden idol. Specifically, in this story, we read about three Jews who were targeted: Shadrach, Meshach, and Abednego. These were three young, Jewish men to whom we are introduced, along with Daniel, in the first chapter of the book.

Now clearly for these guys, along with any other Jew who would not compromise his or her faith in the true God by worshiping an idol... for these, this is certainly a time of crisis, isn't it? If they will not bow, they will burn. If they will not submit, they will suffer. How would you respond in the face of this threat? How will they respond... to the king!? In light of certain death? Well, listen...

Shadrach, Meshach, and Abednego answered and said to the king, “O Nebuchadnezzar, we have no need to answer you in this matter. [17] If this be so, our God whom we serve is able to deliver us from the burning fiery furnace, and he will deliver us out of your hand, O king. [18] But if not, be it known to you, O king, that we will not serve your gods or worship the golden image that you have set up.”

Did you hear that? How did these young men respond? They were firm in the face of fear. They stood firm in light of what? In light of the truth about God. Nebuchadnezzar had arrongantly and ignorantly asked in verse 15, “...Who is the god who will deliver you out of my hands?” These three know the answer to that question, if the king doesn't.

Brothers and sisters, friends, this passage is right in the middle of this story for a reason. It is absolutely key to our earlier question, “What might God want you to know about your response in a time of crisis?”. Look back at verses 17 and 18. Keep the answer of these men in mind. We'll come back to it in just a minute. First, listen as the story continues in verses 19-25...

The king's pride was hurt, wasn't it? He didn't like these three foreigners telling him “no”. He didn't like not getting his way. So what does he do? He turns up the heat... literally. He is so intent on proving his position and power that he sacrifices some of his own men to the unsafe conditions he's created.

But his power is no match for God's power. No golden idol, no King of Babylon, could do what God did. He protected his servants in the midst of the fire. He sent his angel to encourage them. As these three young men stood for God, God stood with them. Shadrach, Meshach, and Abednego were right when they said, “...Our God whom we serve is able to deliver us from the burning fiery furnace”. But what does the king have to say about all this. Look at vs. 26-30...

Wow! Nebuchadnezzar went from “fury” in verse 19 to faith in verse 28. Yes, he's still extremely harsh. But even though he didn't get his way, even though this king of Babylon was humiliated by the King of heaven, the astounding deliverance of these three men drove Nebuchadnezzar to accept the truth about God; more than that, in the end, to bless God and to extol God. These young Jews may have found themselves in a time of crisis only minutes earlier. But in the end, they found themselves in a time of divine intervention... in more ways than one.

III. An Even Worse Disease

Okay. This is where we need to go back to the response of these young men, to what they told the king in verses 17 and 18. Look back at what they said... If this be so, our God whom we serve is able to deliver us from the burning fiery furnace, and he will deliver us out of your hand, O king. [18] But if not, be it known to you, O king, that we will not serve your gods or worship the golden image that you have set up.”

In the face of today's crisis, in the face of any crisis, all of us know we can and will be tempted to fear. Maybe that's where you find yourself this morning. Fearful. Panicky. Anxiously uncertain. Whether you feel tempted by fear, or trapped by fear this morning, be encouraged. God has good news for you. Like these young men, God can help you, he can help us, stand firm in the face of fear. He is calling you to look to the example of these men, and to listen to their answer.

What did they believe? They believed 1) God, as God, is able to deliver, 2) God, as God, will deliver, and 3) God is God, even if he doesn't. Wait, what? Brothers and sisters, friends, to be firm in the face of fear, you must first be firm in faith. Faith as an end in itself? No. That would simply be faith in faith. These young men had faith in, they trusted in God, the God of Israel. And their faith in the midst of that crisis was both faith in God's power to deliver AND God's plan to deliver.

But thanks be to God that He is a God who delivers. Just as he sent an angel to help those young men in that place of peril, so too did God send Jesus Christ for us, in our place of peril; in our time of cosmic crisis. Through his death and resurrection, Jesus Christ delivers all who trust in him. Do you? Will you?

In light of all this, how should we respond to our current crisis? We don't have to be afraid. We don't have to maximize or despair. God will deliver. Our greatest concern should never be losing our job, our health, or even our lives. Our greatest concern should be losing God's love. But God has reassured us when fear presses home that very concern. We read in Romans 8:35-39,

Who shall separate us from the love of Christ? Shall tribulation, or distress, or persecution, or famine, or nakedness, or danger, or sword?... [37] No, in all these things we are more than conquerors through him who loved us. [38] For I am sure that neither death nor life, nor angels nor rulers, nor things present nor things to come, nor powers, [39] nor height nor depth, nor anything else in all creation, will be able to separate us from the love of God in Christ Jesus our Lord.

That, friends, is the solid ground we need to stand firm in the face of fear. Let's pray. 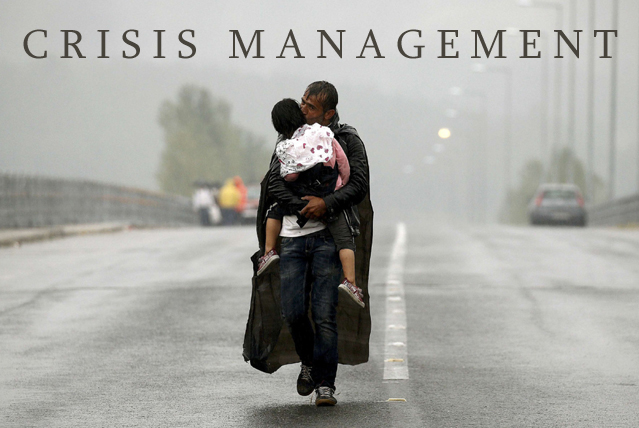