I. The Unhealthy Mouth

The past couple of weeks we've heard more and more about the effects of an unhealthy mouth. This is how the CDC describes the scenario:

[COVID-19 is spread person-to-person] through respiratory droplets produced when an infected person coughs or sneezes. These droplets can land in the mouths or noses of people who are nearby or possibly be inhaled into the lungs.

Clearly, as you watch the news or just look around you, this is a scenario about which many, many people are deeply concerned.

As we heard two weeks ago from Proverbs 18:21, “death and life are in the power of the tongue”, that is, our words can either be deadly, destructive, hurtful, OR, they can be life-giving. Having talked last week about 'words that make well', I thought it would be important to look this morning at what the book of Proverbs can tell us about words that wound.

Turn with me to Proverbs 11.

We're beginning this morning with four verses from Proverbs 11. As I read verses 9-12, think about what they reveal in terms of an unhealthy mouth. Verse 9...

With his mouth the godless man would destroy his neighbor, but by knowledge the righteous are delivered. [10] When it goes well with the righteous, the city rejoices, and when the wicked perish there are shouts of gladness. [11] By the blessing of the upright a city is exalted, but by the mouth of the wicked it is overthrown. [12] Whoever belittles his neighbor lacks sense, but a man of understanding remains silent.

1. Your Mouth, Your Community

The first thing you may have noticed is how this grouping of proverbs all seem to be focused on the well-being, not of an individual, but of a city. Do you see that? We find the word “city” in verses 10 and 11. But we also find the word “neighbor” in verses 9 and 12. And the contrast in each verse seems to make the same point.

On one side you have the “godless man” and the “wicked”, and on the other hand, you have the “righteous”, the “upright”, and a “man of understanding”. But even more important to our study, in three of these four verses, it is the mouth, it is the words of either the wicked or the righteous that make all the difference.

Consider with me what we find here about words that wound. Verse 9: “With his mouth the godless man would destroy his neighbor...”. Verse 11: “...by the mouth of the wicked [a city] is overthrown.” Verse 12: “Whoever belittles his neighbor lacks sense...”.

Now, before unpack that idea of a mouth that destroys, think for a moment about the context and consequences of this unhealthy mouth. In ancient Israel, most 'cities' were what we would call villages. They were communities in which everyone knew their neighbor; communities in which a hurtful, a thoughtless, an untrue word could affect more than just individuals. It could affect the health of the whole community.

Given that historical reality, I think it may be more helpful for us to think about this context and these consequences in terms of our church community. Yes, your words, my words, can and have hurt another person. But they can and have also hurt our life together. Even when others are unaware of what's been said, we can all feel ways in which our unity as been hurt or hampered. If it's your desire to build up the church, then think carefully about your words.

2. The Mouth that Destroys

Specifically, think with me about the mouth that destroys. When you consider 11:9 as a whole, clearly when King Solomon talks about the possibility of a neighbor being destroyed or of the righteous being delivered, he has something specific in mind; a specific scenario or scenarios. But for us this morning, I thought the general idea of words that “destroy” would be a good starting point to consider other passages in Proverbs.

Now, clearly, there are plenty of places throughout this book that talk about “the mouth of a fool” (14:3) or “the mouth of the wicked” (12:6) or even as we considered last time, a “mouth... [that] conceals violence” (10:11). But let's get more specific and look at four aspects of this destroying mouth; four ways, in Proverbs, that words wound. First of all, the mouth that destroys is...

Clearly, the person who puts himself or herself first, who attempts to exalt himself or herself over others, is a person more likely to step on others if it means a step up for them. Consider how the following verses exemplify the 'self-exalting mouth' and if this, too often, might describe you:

A fool takes no pleasure in understanding, but only in expressing his opinion. ...If one gives an answer before he hears, it is his folly and shame. [18:2, 13]

But how easy it is for the man or woman consumed with self to also speak with...

When you spend all your thoughts on yourself, it's not surprising when your words towards others are so thought-less. Listen to how Solomon talks about this kind of talk...

Whoever guards his mouth preserves his life; he who opens wide his lips [who simply vomits out his thoughts] comes to ruin. [13:3]

Rash words. Hasty words. Thoughtless words that prod and provoke; that incite and ignite others; words spoken with very little thought about the consequences of what's being said. Those are certainly words that destroy. But are they, too often, your words? But Solomon also describes the destructive power of...

Now, there are at least fourteen or fifteen proverbs explicitly about the “lying tongue”. A good example is Proverbs 26:28: “A lying tongue hates its victims, and a flattering mouth works ruin.” But most of us might just dismiss these verses, since we're not walking around spouting bald-faced lies to the people in our lives. Since (what we might call) 'gross-lying' is less common, let me highlight some proverbs in which the deception is far more subtle (like the “flattering mouth” of 26:28). Consider these, and whether you might be guilty of such 'truth-twisting'...

In all toil there is profit, but mere talk tends only to poverty. [14:23][“mere talk”=deception]

Whoever robs his father or his mother and says, "That is no transgression," is a companion to a man who destroys. [28:24] There's that clear connection to the mouth that destroys; it's a mouth that tries to rationalize hurtful, sinful behavior.

Finally and similarly... This is the way of an adulteress: she eats and wipes her mouth and says, "I have done no wrong." [30:20] What do you tell yourself and others about your sin?

The most obvious proverbs when it comes to the mouth that destroys are those that describe...

A soft answer turns away wrath, but a harsh word stirs up anger. [15:1]

A worthless man plots evil, and his speech is like a scorching fire. [16:27]

Along these lines, 20:20 speaks soberly about the one who “curses his father or his mother”, 25:23 mentions how “a backbiting tongue [brings forth] angry looks”, and 30:10 warns the reader, “Do not slander a servant to his master”. And then there are all the verses related to “the whisperer” and the one who “reveals secrets” (20:19)(related verses would be 17:9, 18:8, 26:20, 22). This person is the meddler and the gossip. This is the person whose words betray and slander; often the person afraid to settle a matter face-to-face, but not afraid of talking badly about that same person to others. We read about this kind of person in 25:9, 10 [from NASB]...

Argue your case with your neighbor, And do not reveal the secret of another, [10] Or he who hears [it] will reproach you, And the evil report about you will not pass away.

Whether it's a harsh word to someone's face or a hushed word behind someone's back, all of us are guilty of verbally assaulting our neighbor, whether that be an acquaintance, a co-worker, a friend, a family member, or even a brother or sister in Christ.

III. The Redeemed Heart... and Mouth

Now as we stop and think about when words wound, clearly there are many other passages in both the OT and NT that speak to this very issue. But as we've seen this morning, Proverbs speaks over and over again to this painful reality of the mouth that destroys; of the self-exalting mouth, of the thought-neglecting mouth, of the truth-twisting mouth, and of the neighbor-assaulting mouth.

But what are we to do with all this? What does God want you to take from verses like these? Well, first, I think we need to be honest about and repent over all the times we've spoken to others out of a foolish mindset or with a wicked heart. More so, it's important we identify any patterns when it comes to this kind of speech. Yes, some people yell and say nasty things to other people. But even if you don't, it doesn't mean you're not wounding others with your words.

Second, you need to pray specifically for a change with your mouth that begins with change in your heart. This is what Jesus said in Luke 6:45...

Is it your desire to 'bring forth good' through your words... to bless and building others up?

If it is, Jesus tells us that such words come from a “good person” who draws those blessing, building words from “good treasure” in his or her heart; for remember, “out of the abundance of the heart his mouth speaks”.

So... that means the million dollar question is, “How do I become a good person, with good treasure inside me”?

Well, remember this: the Jesus who talked about the “good person” in Luke 6 is the same Jesus who declared in Luke 18, verse19 that, “No one is good except God alone.” And yet even earlier, in Luke 11, while confirming our guilt, Jesus spoke the possibility of “good treasure” inside us”

“If you then, who are evil, know how to give good gifts to your children, how much more will the heavenly Father give the Holy Spirit to those who ask him!” (Luke 11:13)

Brothers and sisters, friends, the only way to change your unhealthy mouth is to change your unhealthy heart. And the only way to change my unhealthy heart is for the Spirit of God to live inside me, transforming me, making me more and more like Jesus. Jesus suffered on the cross and rose from the dead in order to make that very thing possible; forgiveness for a mouth that destroys and power for a mouth that gives life. Do you want that for your life?

God is a generous Father. He loves to give to those who ask. Let's pray, confessing in light of what we've heard this morning, and requesting in light of the generous gift of the Holy Spirit. By redeeming our hearts through Jesus, may God redeem our mouths as well, and may that be evident this very day as we bless and build up, through the Holy Spirit. 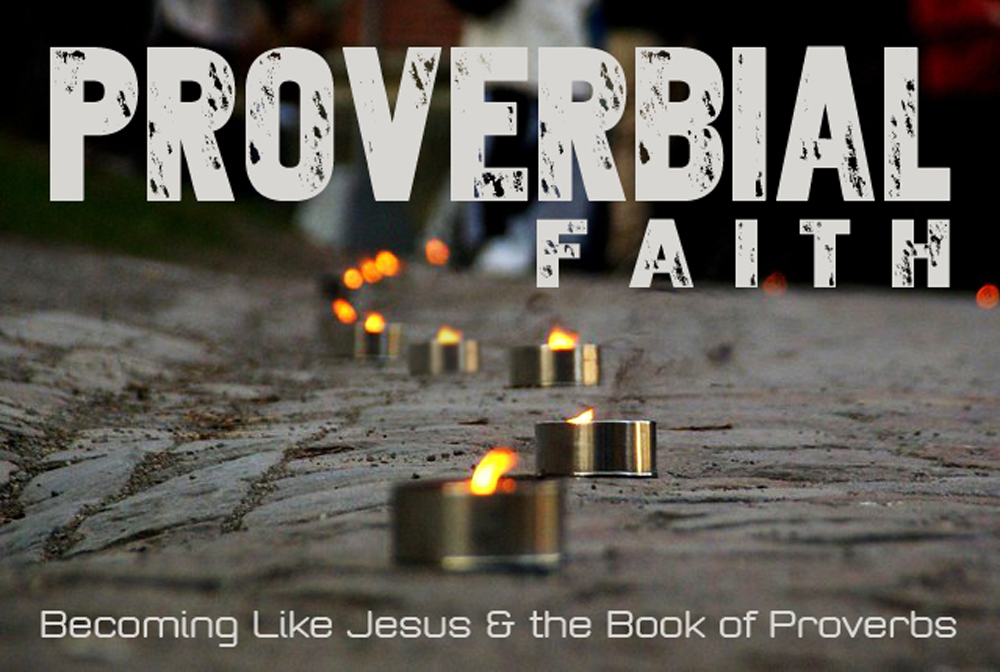