The Thing About Self-Control (Proverbs 25:28)

I. Tempted by the Table

Temptation. Tempted. Tempting. While these words might be common in the Bible, doesn't it seem like they are being used less and less in the modern world? When I think about these words in popular culture, they seemed to be used most often in connection with... food. Think about it: haven't you heard someone say, “Doesn't that souffle look tempting?” or “I gave into temptation and went back for seconds”.

In fact, many of you may hear some form of that word later this week, on Thursday afternoon or evening. When it comes to food, Thanksgiving Day tops the list in terms of culinary temptation, doesn't it? How will you be tempted on the upcoming holiday? What's your weakness? Is it stuffing? Or maybe pumpkin pie?

But should we really use the word “temptation” in regard to food? If we use that term in reference to both sin and a souffle, doesn't that simply water down its meaning? While I think there's a valid point to be made about that issue, it's important to remember that Thursday's meal, along with many other situations and settings on Thursday, along with every other day of the week, that all of these will provide opportunities where we will or will not practice a clear biblical virtue: self-control.

Let's consider that virtue this morning by look together at the book of Proverbs, chapter 25.

When it comes to the topic of self-control, there are three areas I'd like to look at this morning. These ideas are related and can be found in many places throughout the book of Proverbs. For example, consider with me the idea of being...

A man without self-control is like a city broken into and left without walls.

The translation we find in the NASB is actually closer to the original Hebrew. It says...

Like a city that is broken into and without walls, is a man who has no control over his spirit.

So when the ESV uses the term “self-control”, it's actually translating a Hebrew phrase, “control over one's spirit”.

But what exactly does the Proverb mean? Well, the imagery of the city conveys the idea that the person who lacks self-control is defeated and defenseless when it comes to temptation. Self-control is the ability to say “no” to yourself whenever your desires are unhealthy.

If we think about the opposite of the imagery used in verse 28, then I think we can say that, in some way, having self-control, that practicing self-control, leads to protection and preservation.

But as it stands, the proverbs seems to be saying that the man or woman who lacks self-control has been morally, has been spiritually, overrun by whatever was tempting them. Therefore if the self, if you, are not in control, something else is. The second half of II Peter 2:19 puts it this way:

For whatever overcomes a person, to that he is enslaved.

The 1984 film “Red Dawn” imagined a Soviet invasion of the U.S., and depicted how everyday, patriotic Americans in a small town fought back. The film made clear what every Cold War American believed: “we will never allow anyone, including the Soviet Union, to come in and control us... we will live free or we will die fighting”.

But how many of us, who could never imagine living as an occupied people, how many of us allow this or that to rule us... because we lack self-control? But let's be more specific about “this or that”; let's do that by considering...

What's interesting about verse 28 is how the verse just before it, verse 27, introduces the idea:

It is not good to eat much honey, nor is it glorious to seek one's own glory.

Now that first part about honey actually points us back to verse 16 of this same chapter...

If you have found honey, eat only enough for you, lest you have your fill of it and vomit it.

But notice how verse 27 takes us from honey to humility, or the lack thereof. I think verse 27 is using honey as an object lesson. In essence, Solomon is saying, “You know too much honey will make you sick. But did you know too much bragging, too much prideful posturing, is also unhealthy? It definitely is.”

So think about that for a minute. All of these verses from chapter 25 are speaking about our need for self-control. But consider the breadth of the topics addressed: from your appetite to your arrogance. I think that reminds us that self-control is important in every area of our lives, since in every area, all of us can go to unhealthy extremes.

Brother, sister, friend, in what areas do you desperately need to exercise self-control? In what ways today are you defeated and defenseless? But also consider with me the ideas of...

Turn over to Proverbs 16, if you would. In verse 32 we find another reference to this same idea, only this time, expressed positively....

Whoever is slow to anger is better than the mighty, and he who rules his spirit than he who takes a city.

So the person who is “slow to anger” is the person who can “rule his spirit”, that is, his or her heart does not override his or her head; or to put it another way, this person demonstrates self-control when it comes to responding out of unrighteous anger. They may feel angry, but he or she is able to keep it in check. Notice that, along with appetite and arrogance, we can add anger to the 'self-control subjects' addressed in Proverbs.

Whoever restrains his words has knowledge, and he who has a cool spirit is a man of understanding.

A fool gives full vent to his spirit, but a wise man quietly holds it back.

Think for a moment about what God has shown us this morning; about the importance of self-control. Think about the areas addressed: your appetite, your arrogance, your anger, your... answers (your words, your speech). Now think about your life. Where is abundantly clear that you need to practice self-control? How have others been hurt because you did not 'rule your spirit'? How have you been hurt by your inability to show restraint? In what ways are you feeling defeated and defenseless?

III. Both Given and Striven

The thing about self-control is that it isn't truly virtuous unless the one in control lives to turn that control over to God. (2x)

In God's economy, the self-controlled man who considers himself better than others because of his discipline and restraint is ultimately not a man of self-control. Why? Well, first, because pride is really in control. But second, genuine self-control can never be self-exalting because the chief end of genuine self-control is to submit the self to God. Isn't this what Jesus did when he prayed to the Father about his death, saying, “not as I will, but as you will” (Matthew 26:39)?

As Jesus demonstrated, to submit the self to God does not mean that God overrides the self and we become only possessed and passive vessels. No. To submit the self to God means we recognize that God knows best, that were accountable to God, and that God helps those who trust Him. Therefore, when we are tempted to respond to harshly to unkind person, we exercise self-control in order to honor God and what God has said about loving others.

In fact, you may have been sitting here for the past few minutes stewing in guilt; beating yourself up about your lack of self-control.

Brothers and sisters, friends, wonderfully, God knows our need and God has provided for our need. Listen to both of these verses and see if you can identity what they have in common:

...for God gave us a spirit not of fear but of power and love and self-control. [II Timothy 1:7]

Did you hear how Paul describes God's amazing provision? For all who embrace his Son, Jesus, in faith, God has given us his Holy Spirit. And that Spirit gives us everything we sorely lack, including self-control. Isn't that wonderful? No one wants to be “like a city broken into and left without walls”, right? When we consider God's word and the example of God's Son, we recognize how important self-control really is.

But when the NT speaks about self-control is not only speaks of that which if given, but also of those who have striven. Listen to how Paul encourages us in I Corinthians 9:25

Every athlete exercises self-control in all things. They do it to receive a perishable wreath, but we an imperishable. [and just before that he wrote... ] Do you not know that in a race all the runners run, but only one receives the prize? So run that you may obtain it.

If you are Christian, a true disciple of Christ, then God has called you to exercise self-control in all things, and to do so like an athlete does in his or her sport (think discipline; think focus; think endurance). That begins with being honest about your struggles; about your sin. But it's carried out with prayerful reliance in light of God's provision. Through his Spirit, God loves to empower us for self-control. But remember another means of grace He loves to use: his people. How might your spiritual brothers or sisters help you in this pursuit of self-control?

And for those of you who aren't sure about your relationship with God, who aren't sure what it really means to be a Christian, then please know there is hope in the face of your spiritual slavery. Only Jesus can set you free and make true self-control possible (remember, true self-control ultimately means submitting the self to God in every area). Feel powerless this morning? Jesus has power to change you, and gives power to live a new life. Let's confess our failures in this area this morning, and look with gratitude to the forgiveness Christ makes possible. 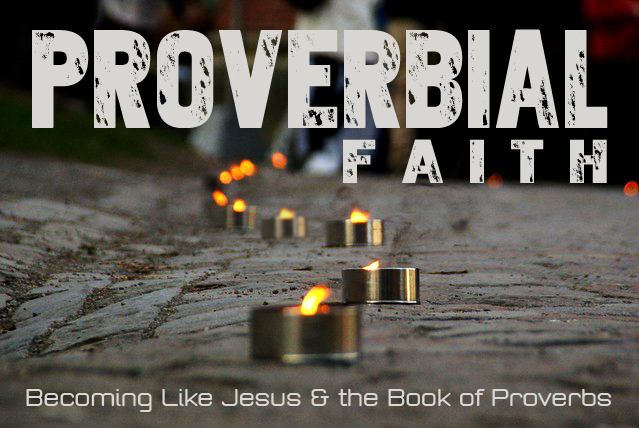