Topic: Death/Heaven/Hell, One Lord: So Great a Salvation Passage: Philippians 1:19–26

In 1965, according to a Harris poll, 97% of Americans claimed to believe in God. When that same question was asked by Gallup in 2014, the number had dropped to 86%. In most cases, other questions about religious belief and practice have followed this same downward trend.

But interestingly, while 73% of Americans in 1974 indicated a belief in an afterlife, that number had increased to 80% in 2014. And yet, even though an overwhelming majority of people believe in life after death, conceptions of that afterlife (i.e., what is, what it will be like) differ widely from person to person.

For example, some Muslims believe the life to come will be a Paradise where faithful men will enjoy seventy-two virgins, I guess for eternity. Others with more Christian-influenced, folk beliefs about heaven often emphasize reunions with deceased loved ones or physical restoration and wholeness. Many people, including Hollywood filmmakers, often think about the afterlife in terms of green grass, sunshine, a babbling brook, and other serene images from the natural world.

Hold onto to that principle as we look together this morning at Philippians chapter 1.

You may remember that last week we began a new study entitled, “When You Die”. We started that series by looking together at Ecclesiastes 7:2. In that verse, God, through the inspired writer, encouraged us to dwell on death... no, not in a morbid way, but in a meaningful way.

What does it mean to dwell on death in a meaningful way? Well, as we talked about last time, it means remembering that we WILL NOT live forever, thus, we shouldn't act like we will. There is wisdom in remembering that your life is fleeting. But the biblical wisdom that comes from dwelling on death also means remembering we WILL live forever, and thus, living each day in light of eternity. While life in this world will not last forever, each of us has an eternal destiny, one influenced, positively or negatively, by choices in this life.

The Apostle Paul thought a lot about the afterlife and his eternal destiny. He wrote about that very subject many times, in many different places in his letters. The book of Philippians is a good example. Look with me at one of those passages: 1:19-26.

Let me walk you through these verses, and a few points that will help us to understand the flow of Paul's thinking here. First of all, notice how in verse 19 we learn about...

[Paul declares...] for I know that through your prayers and the help of the Spirit of Jesus Christ this [i.e., Paul imprisonment for the gospel (which he mentions in verses 7, 13, 14, 17). Paul declares (v. 19) “this” imprisonment] will turn out for my deliverance...

Even while he is languishing as a prisoner of the Roman authorities (arrested for his faith), Paul is encouraged by two very powerful realities. Do you see those in verse 19? First, Paul reminds the Philippians about the power of “your prayers”. If you're looking for verses that speak about how prayer makes a difference, here's a great one.

Of course, the prayers of the disciples in Philippi are ultimately only effective because of that second powerful reality: “the Spirit of Jesus Christ”. Interestingly, the Holy Spirit is referred to in several places in the NT as the “Spirit of Jesus” (Acts 16:7; Romans 8:9). In this verse, Paul expresses assurance that the Holy Spirit, in concert with the prayers of God's people, will do a surprising work through Paul's imprisonment.

How will the Spirit work? To bring about Paul's deliverance. But before you feel settled about what that means, look at verses 20 and 21. In those verses, we go on to learn about...

Those verses, 20 and 21, tell us something important about Paul's perspective. Listen to what he wrote...

...It is my eager expectation and hope that I will not be at all ashamed, but that with full courage now as always Christ will be honored in my body, whether by life or by death. [21] For to me to live is Christ, and to die is gain.

Now, those verses don't use the word “pledge”, but can you hear the personal resolve Paul is expressing there? I think it's fair to say, based on everything we know about Paul, that from the earliest days of his faith, Paul had resolved to glorify the Lord Jesus with his whole life, and if necessary, through his death as well.

As we read here it was his “eager expectation” to stand firm in his faith... hopeful... courageous. He didn't even entertain the idea of renouncing Christ, either by word or deed. So even now, even in chains, he was resolved to honor Jesus, “whether by life or by death”.

But should this talk of life and death change how we understand the word “deliverance” at the end of verse 19? Is Paul speaking there about a different kind of deliverance? Keep that question in mind as we look at the next few verses, which describe...

Remember, Paul just talked in verse 21 about living for Christ and dying in Christ. Look at how he explains (in vs. 22-24) the dilemma that creates. Verse 22...

If I am to live in the flesh, that means fruitful labor for me. Yet which I shall choose I cannot tell. [23] I am hard pressed between the two. My desire is to depart and be with Christ, for that is far better. [24] But to remain in the flesh is more necessary on your account.

But on the other hand, Paul deeply desired the “gain” he mentioned at the end of verse 21. Dying meant departing from this life. But it didn't mean leaving Christ. In fact, it meant “be[ing] with Christ”; it meant being in the presence of Jesus, who even now is there in the presence of God, at His right hand, in fact.

And that tension between being set free and being executed, between living and dying, that struggle (what Paul described in verse 23 as being “hard pressed”), was so powerful because of what the Apostle tells us about being with Christ. Did you hear his appraisal at the end of verse 23? My desire is to depart and be with Christ, for that is far better.

But as we see in the next two verses, Paul's present dilemma was ultimately resolved by...

As we just heard in verse 24, Paul knew the Philippians needed his ongoing help. Verse 25 tells us where that knowledge led...

Convinced of this, I know that I will remain and continue with you all, for your progress and joy in the faith, [26] so that in me you may have ample cause to glory in Christ Jesus, because of my coming to you again.

Although Paul doesn't explain here how he knows what he knows, I think it's reasonable to say that, through “the Spirit of Jesus Christ”, Paul was given a clear sense that it wasn't his time to depart from this world. His “deliverance” (v.19) really was about release from imprisonment! So Paul stayed focused on “fruitful labor”; on the Philippians and their “progress and joy in the faith”. And not surprisingly, as he explains in verse 26, he continues his earthly ministry in order that Christ might be glorified through (1:5) their “partnership in the gospel”.

Now that we have (hopefully) a better sense of what Paul's written here, let's come back to that question of the afterlife. Based on this passage, what might we say about Paul's conception of the afterlife? Well, I think it's instructive... in fact, I think it's incredibly significant, that Paul did not say in verse 23, “My desire is to depart and be with those who have gone before me.”

Now, based on the rest of this passage (and, in fact, the rest of the letter), is it really surprising that Paul's conception of the afterlife is defined by the presence of Jesus Christ? ...Paul, who in his chains, looked to (v. 19) the “help of the Spirit of Jesus Christ”? ...Paul, who (v. 20) always sought to honor Christ, both in life and death? ...Paul, who (v. 21) summed up his life with that one word: “Christ”? ...Paul, who (v. 26) was so eager to see others glorify Christ Jesus? Is it really surprising that this Paul defines death as “gain” because, when he dies, he will then fully be, as never before, in the presence of Jesus?

Paul told the Corinthians about that same glorious meeting when he wrote:

For now we see in a mirror dimly, but then face to face. Now I know in part; then I shall know fully, even as I have been fully known. (I Corinthians 13:12)

What Paul desired so deeply was also what Jesus desired. He prayed in John 17:24...

Preserving those words in his Gospel, John also wrote in his first letter about Christ's presence:

Beloved, we are God's children now, and what we will be has not yet appeared; but we know that when he appears we shall be like him, because we shall see him as he is. [3] And everyone who thus hopes in him purifies himself as he is pure.

But it's Paul who may have best summed up the bigger picture when he wrote these words:

Is your faith a 'face-driven' faith? That is, do you long to see Jesus face to face? Do you long to be with him when you die? Can you sincerely say with Paul, “...for that is far better”? If you can, that afterlife desire will most certainly shape your current-life design. Conversely, a Christ-focused, Christ-saturated life now will only deepen your longing to be in his presence then.

This is the principle I mentioned at the outset: “what you desire most for the life to come is evident from what you desire most in the life that is now”. If you see death as leading to Christ, then your life now should be led by Christ's leading. Inasmuch as something other than Christ controls your conception of the afterlife, your life now will reflect that deviation.

Why is an afterlife defined by Christ so good? Because in Christ, the fullness of a good God, who defines what is truly good, who embodies what is truly good, that goodness is ours forever. Jesus didn't die simply to offer us life, but life with himself. And He rose again to make that forever life a reality. When you die, will you, by grace through faith, be with Christ? I pray that's your desire, and I pray you will know God's assurance. Let's pray together in light of all this. 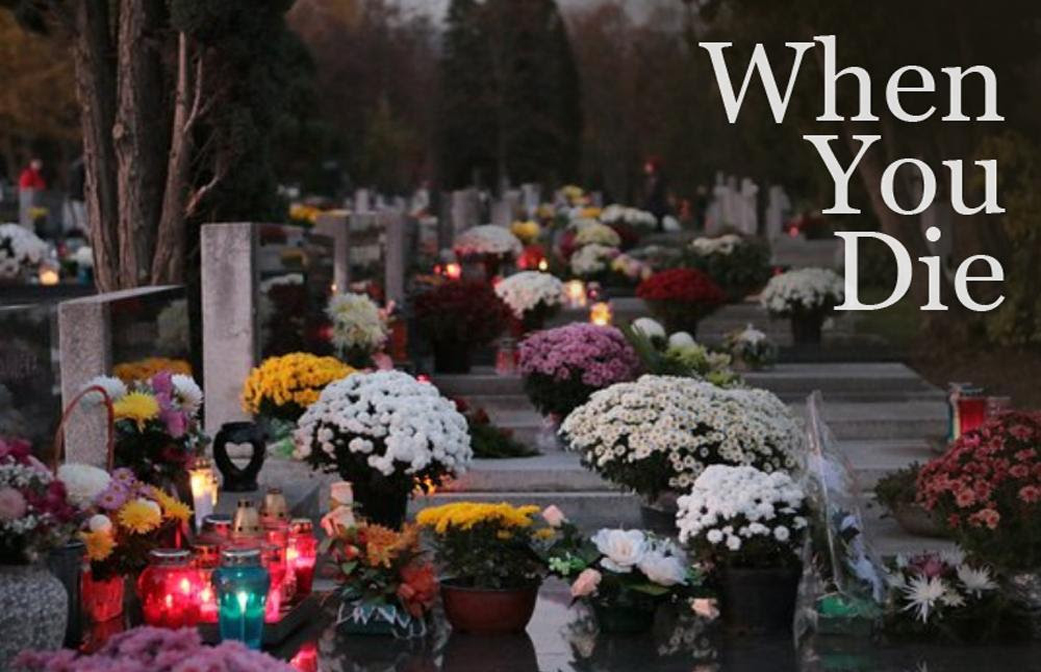 More in When You Die

A Case for Hell (II Thessalonians 1:9)