I. A Temporary Truce

Christmas and peace. How do those two words fit together in your mind? Just over a hundred years ago, in 1914, those two words met in an extremely unexpected way. It was Christmas Eve in the opening months of World War I, and there had bitter fighting between German and British forces. But listen to how a miraculous truce came about that evening:

Most accounts suggest the truce began with carol singing from the trenches on Christmas Eve, “a beautiful moonlit night, frost on the ground, white almost everywhere”, as Pvt. Albert Moren of the Second Queens Regiment recalled, in a document later rounded up by the New York Times. Graham Williams of the Fifth London Rifle Brigade described it in even greater detail:

The next morning, in some places, German soldiers emerged from their trenches, calling out “Merry Christmas” in English. Allied soldiers came out warily to greet them. In others, Germans held up signs reading “You no shoot, we no shoot.” Over the course of the day, troops exchanged gifts of cigarettes, food, buttons and hats. The Christmas truce also allowed both sides to finally bury their dead comrades, whose bodies had lain for weeks on “no man’s land,” the ground between opposing trenches. (Time.com)

Isn't it amazing how Christmas brought peace to these battle lines? How men, who the day before were trying to kill one another, were now singing together and exchanging gifts? But sadly, as we know, this was not a lasting peace. The war would continue for several more years, and in the end, tens of millions of lives would be lost.

For some of you peace at Christmas means getting together with and tolerating family members you dislike. For others, peace is only possible after Christmas, when the pace of the season begins to slow down, and life gets back to 'normal'.

But let me suggest to you this evening that a genuine, deep, inward, and lasting peace is possible for each and every one of us this evening. And just like that account from World War I, Christmas is the very thing that can make that peace possible. Listen again to these words from Luke 2. You read them out loud only moments ago. Luke 2:13, 14...

And suddenly there was with the angel a multitude of the heavenly host praising God and saying, [14] “Glory to God in the highest, and on earth peace among those with whom he [with whom God] is pleased!”

Why this chorus [literally, why this army of angels]? Because the message given in verses 10 and 11 was too astounding, too earth-shattering, too glorious to stay silent. This is just like applause spontaneously breaking out, or a standing ovation after an amazing musical performance.

Notice how the declaration of the angel points us in two directions: up and down. As they look up, they declare, “God gets all the glory, all the praise, all the fame for this “good news of great joy”. But they also look down, and declare “peace” over humanity. But they're not talking about every person. Did you hear what they said?... “peace among those with whom God is pleased” or “to those on whom his favor rests”.

The peace the angels rejoiced over was directly connected to the “good news of great joy” announced in verse 10... And the angel said to them, “Fear not, for behold, I bring you good news of great joy that will be for all the people. [11] For unto you is born this day in the city of David a Savior, who is Christ the Lord. (ESV)

III. Having Peace with God

Think about that word “savior” for a minute. A savior is one who saves, right? A savior is one who brings salvation. Please don't kid yourself: all of us are looking to be saved; all of us are hungry for help; we're all reaching out for rescue. Every single one of us is searching for the very peace I mentioned a few minutes ago: a genuine, deep, inward, and lasting peace.

But that peace won't be found at the bottom of a bottle or a prescription drug container. That kind of peace won't be found in having more possessions, having more pornography, or having more power at work. A vacation is a good thing, but it can't give you that peace. A relationship is a good thing, but it can't bring you that kind of peace. Only “Christ the Lord” can give you that. That's why his birth inspired the angels to shout about this “peace”.

What kind of peace are we talking about? This is how the Apostle Paul, an early Christian leader answered that question: Therefore, since we have been [declared innocent] in God's sight by faith, we have peace with God because of what Jesus Christ our Lord has done for us. [Romans 5:1 NLT] And what has Jesus “done for us”? Nine verses later Paul speaks about how “while we were enemies we were reconciled to God by the death of his Son”.

You see, the angels rejoiced and spoke about peace, not simply because the Son of God had come, but because he would also go, one day, to the cross and take the punishment our sins deserve. There is no real joy in the announcement of Christ's birth unless it is tied to the announcement of Christ's death. Only that cross outside of Jerusalem could broker the “peace” the angels spoke about years earlier outside of Bethlehem.

The “good news” of Christmas is the same as the “good news” of Easter. Christ came for rebels like us, and died so that we might have both forgiveness from and peace with God; so that you might no longer live for yourself, but for the One who created you. That is genuine peace. That is lasting peace. It's the peace we need more than anything else.

Christmas and peace. By trusting in who Jesus is and what Jesus did, will you receive the greatest Christmas gift of all? Peace with God! And if you have received it, will you savor it tonight? Will you allow the message to humble you again, and inspire gratefulness and love in your heart? 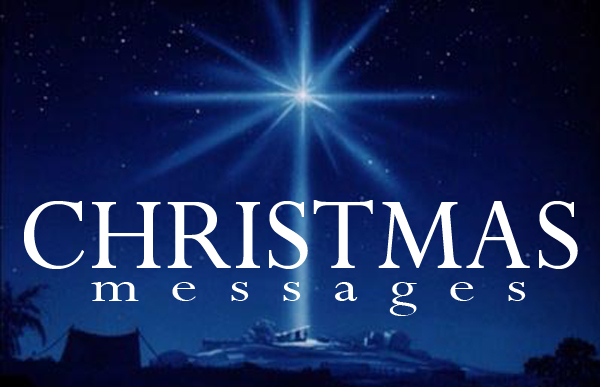