Only a few years before Martin Luther and the church door of Wittenburg, John Knox was born in or near Haddington, Scotland. As a young man, he was trained as a priest, and as late as 1543 described himself with this Catholic title, "minister of the sacred altar in the diocese of St. Andrews, [a] notary by apostolic authority". Though the details have been lost to history, Knox was converted to the Protestant faith in 1544, and became the sword-wielding bodyguard to a Scottish reformer, George Wishart.

His conversion led to a fifteen year journey of persecution in Scotland, a prison ship in France, preaching in the Church of England, and preparation in Geneva under John Calvin. But from 1559 to his death in 1572, John Knox labored for the salvation of Scotland. He worked with the Scottish nobility to oust the Roman Catholic Church and establish what was called the Presbyterian Church. His heart's cry is rememberd in the famous words, “Give me Scotland, or I die!” Listen to how one writer describes the heart of John Knox...

From the first page to the last of John Knox’s written works, the reader is brought relentlessly back to the source of Knox’s greatness: Christ was at the center of every dimension of his life. It is this, and this alone, that made Knox mighty in his weakness...It was [the] honest admission of his frailty, and his corresponding reliance on Christ, that gave him such force against the enemies of the gospel. He was not posturing when he admitted his fears. Because he knew himself to be a man of inherent weakness, and because he was an honest, humble man, he could say without pretext, “I sought neither preeminence, glory, nor riches; my honor was that Christ Jesus should reign.” (Douglas Bond)

This morning we come to the fourth of what have been called the Five Solas. What are these Five Solas? They are five “alone” statements that represent critical gospel truths reclaimed or restored by reformers during the Protestant Reformation. We've already studied three sola principles: being guided by “Scripture alone”, to understand that we are saved by “grace alone”, through “faith alone”.

But this morning we want to consider solus Christus, the amazing, the precious, the central, the foundational truth that we stand by and in “Christ alone”. Now in the context of our study, I am not going to focus on what we might call the exclusivity of Christ in a pluralistic setting; that is, I'm not going to talk about guys like Buddha or Muhammad. But I think our study will make it abundantly clear why faith in Jesus Christ is the only true path to peace with God.

In this series we've focused on these principles in the historical context of the 16th century. That means we begin, just as we have before, by understanding the importance of solus Christus in light of the Roman Catholic teaching that was dominant at the time of the Reformation.

So let's look at Hebrews 7:23-28. As I read through this, think about what this passage tells us regarding the necessity AND sufficiency of Christ alone for our reconciliation to God. V. 23...

The former priests were many in number, because they were prevented by death from continuing in office, [24] but he holds his priesthood permanently, because he continues forever. [25] Consequently, he is able to save to the uttermost those who draw near to God through him, since he always lives to make intercession for them. [26] For it was indeed fitting that we should have such a high priest, holy, innocent, unstained, separated from sinners, and exalted above the heavens. [27] He has no need, like those high priests, to offer sacrifices daily, first for his own sins and then for those of the people, since he did this once for all when he offered up himself. [28] For the law appoints men in their weakness as high priests, but the word of the oath, which came later than the law, appoints a Son who has been made perfect forever.

Now before we unpack this passage, let's talk just a bit about the context of this here. This book was written for Jews who had trusted in Jesus as their Messiah, BUT were being pressured to turn from Christ and return to the law and the sacrifices and the traditions of Judaism. For this reason, the writer is working systematically to show how Jesus is the fulfillment of and superior to all the OT provisions.

Verse 26 reminds us that Jesus was and is holy, innocent, unstained, separated from sinners, and exalted above the heavens.

Chapter 4 tells us this about our great High Priest: For we do not have a high priest who is unable to sympathize with our weaknesses, but one who in every respect has been tempted as we are, yet without sin.

The Apostle John emphasizes the same thing in I John 3:15...You know that he appeared in order to take away sins, and in him there is no sin.

So while each one of us has violated God's law, Jesus fulfilled it perfectly. We are fallen and flawed human beings. He alone stands. He alone is the perfect human being. And that prepares us for our next point, specifically...

It was the sufficiency of Christ's life that made him, in the words of I Peter 1:19, like that of a lamb without blemish or spot. Jesus' death on the cross was a perfect sacrifice. Verse 27 of Hebrews 7 speaks to the perfect sufficiency of his sacrifice...

He [Jesus] has no need, like those high priests, to offer sacrifices daily, first for his own sins and then for those of the people, since he did this once for all when he offered up himself.

As we've seen from our study in Leviticus, the Law of Moses called for a daily sacrifice in Israel, both morning and the evening. The fact that this needed to keep happening pointed to the imperfections of that system and the ultimate insufficiency of those sacrifices.

I stark contrast, when Jesus offered himself up, it happened “once for all”. His sacrifice was perfectly effective. When Jesus cried out on the cross, “It is finished”, it really was.

We learn in Hebrews 9 that Christ did not offer himself repeatedly, as the high priest enters the holy places every year with blood not his own, [26] for then he would have had to suffer repeatedly since the foundation of the world. But as it is, he has appeared once for all at the end of the ages to put away sin by the sacrifice of himself. (9:25, 26)

Again, earlier in chapter 9, the writer affirms that Jesus entered once for all into the holy places, not by means of the blood of goats and calves but by means of his own blood, thus securing an eternal redemption. (9:12)

In this passage, the inspired writer confirms for us that the perfect sacrifice of the perfect Lam of God, Jesus Christ, his death on the cross, would have meant nothing if He had stayed dead. But we know what Scripture teaches. We know what the gospel tell us: that Christ died for our sins in accordance with the Scriptures, [4] that he was buried, that he was raised on the third day in accordance with the Scriptures... (I Corinthians 15:3-4)

And because Jesus lives, and will always live, we are reminded here, in verse 25, that he always lives to make intercession for them. In fact, let me read verses 23-25 again:

The former priests were many in number, because they were prevented by death from continuing in office, [24] but he holds his priesthood permanently, [why?] because he continues forever. [25] Consequently, he is able to save to the uttermost those who draw near to God through him, since he always lives to make intercession for them.

III. All You Need

Now, looking at everything that passage, and all the related passages, tell us about Jesus' life, death, and new life, is there really any way to argue against, any reason to question the sufficiency of Jesus as Redeemer?

To be fair, the grave concern of the Reformers was not that the Roman Catholic church was looking to a savior other than Jesus. Their concern was that Rome saw Jesus as a semi-savior; as a limited savior; that the finished work of Jesus did not seem to be good enough for Rome.

Things like penance and indulgences and the intercession of the saints and absolution from human priests and maybe worst of all, what is called the Eucharistic sacrifice, the teaching that Jesus is offered over and over again in the Lord's supper to cover sin for those who participate in this sacramental ritual...all of these things contradict the sufficiency of Christ's life, death, and new life.

What the Reformers found in Scripture is precisely what we found in Scripture this morning: that Christ alone has accomplished our full salvation, “once for all”, and that you and I can add nothing to it, nor can we take anything away from it. You see, the first three solas, those reclaimed principles point to a person; they point to Jesus. Scripture brought us to Him. Grace makes us alive with Him. Faith clings to Him. Pastor Burk Parsons puts it this way:

At the time of the Reformation, the word sola became a necessary qualifier in order to guard the simple truths [of the gospel]...[But] make no mistake, we are not justified by believing the solas but by believing in Christ, and we guard these solas not merely for the sake of an event that took place five hundred years ago in Europe, but for the sake of the event that took place two thousand years ago on a hill outside Jerusalem. (Burk Parsons)

And He is the object of saving faith (Acts 16:31). But remember, as we saw last week with Abraham, saving faith is hope-producing, endurance-inspiring faith. It is not something we simply exercise in the beginning, in order to be reconciled to God. It is the empty hand of the heart that receives God's gift of redemption, AND the empty hand of the heart that, by God's grace, continues to cling to Christ.

Brothers and sisters, what do we truly need that we do not already have in Jesus, have from Jesus, have through Jesus?

Believer, if you began with Christ, have you continued with Him? Where is Jesus in your daily grind? A hundred years after the death of John Knox, the English pastor David Clarkson encouraged his readers in light of that question:

Converse much with Christ...Communion with Christ will make you like him...Delight to talk with him, to meet him, to view his beauty, to hear his voice, to taste his sweetness. Take all occasions to present yourselves before him...Enjoy his presence. Come with inflamed affections. You are unkind when you undervalue Christ; when you do not see enough value in him to take time to seek him, and show higher esteem for things of little worth; when outward enjoyments, relations and interests claim more of your thoughts and affections than Christ; when any object is more lovely, any happiness more desirable, any enjoyments more delightful than Christ's presence...His love to us counted nothing too costly, too difficult, too grievous. Let us likewise show our love to Christ: nothing too hard, or too expensive, or too hazardous, or too grievous. Let us cross our carnal inclinations to follow him in painful and costly service.

Brothers and sisters, in this way, let us stand in Christ alone this week, knowing that by God's grace, we stand because of Christ alone. 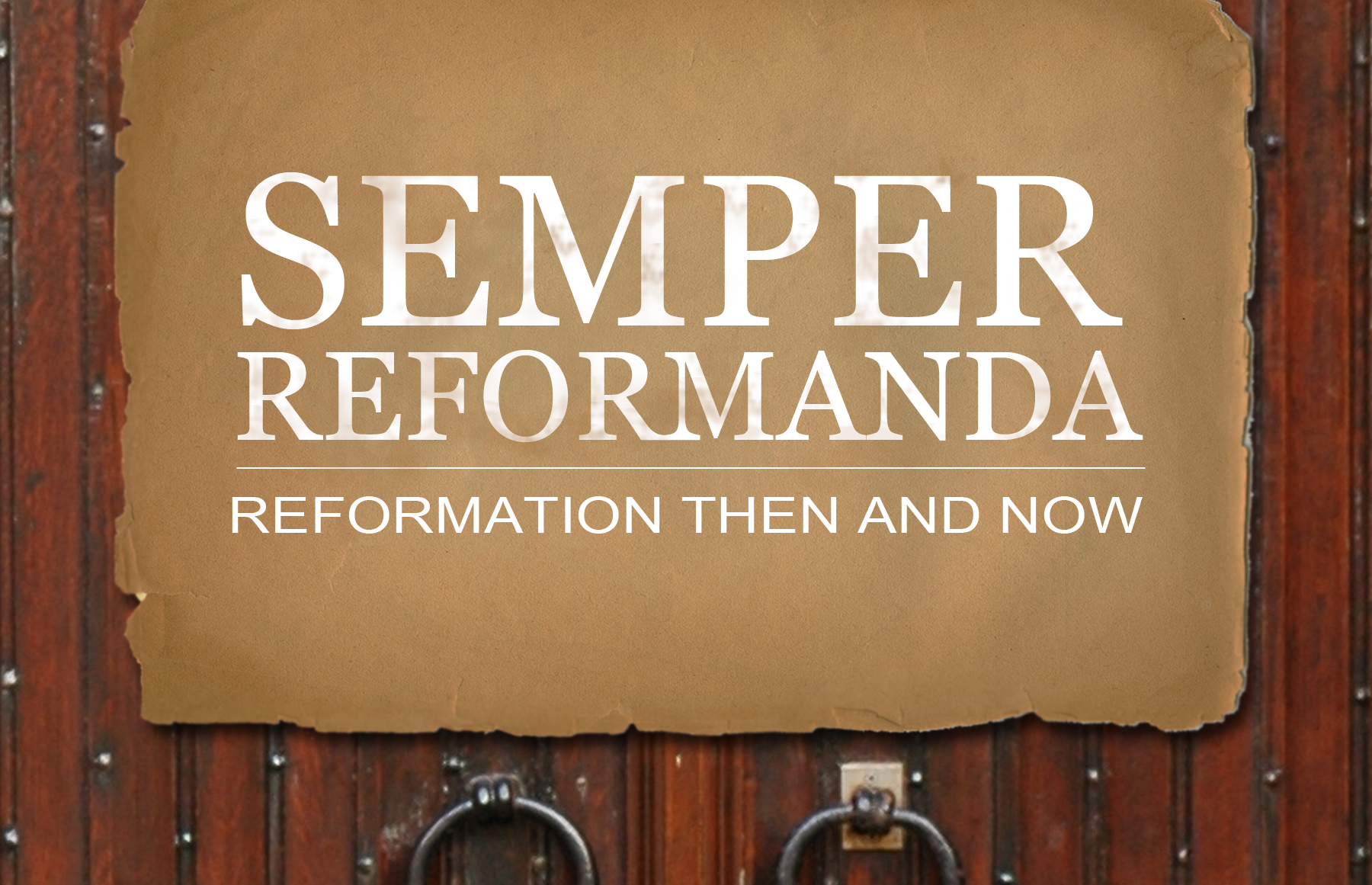 More in Semper Reformanda: Reformation Then and Now

To God Alone Be the Glory (II Corinthians 4:15)