Way of Grace Church is now meeting online! Join us Sunday at 10:00am by heading over to www.wayofgracechurch.com/stream (please log in by 9:55am).

May 7, 2017 Speaker: Bryce Morgan Series: The Essentials: One Lord

I. Accept No Counterfeits

1300 steps from the Notting Hill train station to the High Street Kensington station in London.

But Jesus gave us only three steps to life. For Jesus, the phrase is not “get a life” (a cutdown). No, Jesus says “get life”. Remember what Jesus himself said...

The thief comes only to steal and kill and destroy. I came that they may have life and have it abundantly. [11] I am the good shepherd. The good shepherd lays down his life for the sheep. (John 10:10-11)

But the abundant life the Good Shepherd died to give us is so big and so beautiful and so strong and so dynamic and so unique, that Jesus had to describe it this way: “eternal”.

Are you interested in learning more about Jesus' three steps, the three steps involved in having that kind of life, eternal life? If you are, turn over to Mark 8.

Then he called the crowd to him along with his disciples and said, "If anyone would come after me, he must deny himself, and take up his cross and follow me. [35] For whoever would save his life will lose it. But whoever loses his life for my sake and the gospel's will save it."

Did you hear Jesus talking about life there? And we know when Jesus talked about life, He was not talking about simply existing or the so-called 'good life' the world exalts. He is talking about eternal life. And we find the first step to experiencing that life in both verses 34 and 35. Do you see it?...

Verse 34, “If anyone would come after me”. Coming after Jesus means going after life. In John 14, Jesus said he is “the way, the truth, and the life”. A few chapters after that, Jesus made this statement about eternal life...

And this is eternal life, that they know you, the only true God, and Jesus Christ whom you have sent. (John 17:3)

As we pursue Jesus, we pursue life. But the first step is to give up. Really? No, not give up the pursuit. In verse 35, Jesus talked about giving up by using the word “lose”. He said, if you are willing to “lose” or give up your life, you will actually find it. Sounds paradoxical, doesn't it?

Remember how Peter denied Jesus? After Jesus was arrested Peter was unwilling to be identified with Jesus because of fear that He too would be captured. His denial was a rejection of identification with Jesus.

Well, I believe that God has given us some help here in this passage. Look at verses 32 and 33 of this same chapter. We read:

And [Jesus] said this plainly. And Peter took him aside and began to rebuke him. [33] But turning and seeing his disciples, he rebuked Peter and said, “Get behind me, Satan! For you are not setting your mind on the things of God, but on the things of man.” (Mark 8:32-33)

Now I want to wait and talk in a few minutes about what Jesus said that got Peter so worked up. But Jesus is clear about the problem with Peter's reaction. Verse 33, his mind was set, not “on the things of God, but on the things of man.” You have to know something is wrong with you if you're rebuking Jesus, the Son of God.

What Jesus is confronting, what is illustrated by Peter here, is our innate belief as human beings that we know better than God. Not many people admit to this in those terms, but it’s what we all do. There’s only one reason that Peter would have the audacity to correct God’s anointed: if he believed he knew better than Jesus.

We often say in our hearts, “I will do what God has told me not to do, or I will say what God has told me not to say, or I will believe what God has labeled a lie, because He must be mistaken.” Therefore, to deny ourselves is to deny this belief that we know better; to give up that mistaken notion, that misguided outlook. It is to distance ourselves from this belief. To reject identification with that kind of thinking; to confess “O God, there is not one thing that I know better than you. There is not one area in which I am wiser than you. And so I reject that me; I give up on that me; I deny that me.” But that leads us to a second step. Give up, but then...

Again, verse 34. “If anyone would come after me, let him deny himself and take up his cross...”

“Taking up one’s cross”? How is that related to this call to “stand up”. Well the phrase Jesus uses is particularly tricky because , this side of Jesus’ crucifixion, we have all sorts of ideas about the Cross. But we have to think about what Jesus’ original hearers would have understood when Jesus said this.

It would have been quite common for Jews in ancient Palestine to witness the Roman practice of crucifixion. And as would later happen with Jesus, a condemned man would usually have to carry the crossbeam of his cross through the streets on his way to be crucified. This was part of the humiliation and suffering involved with this kind of death sentence.

And so when Jesus talks about “taking up one’s cross”, the crowds would immediately understand this as a call to public humiliation and suffering. This is where we need to go back to the provacative words of Jesus, the words that Peter reacted to so strongly. Look at v. 31...

And he began to teach them that the Son of Man must suffer many things and be rejected by the elders and the chief priests and the scribes and be killed, and after three days rise again.

Peter was rejecting the idea of a suffering Messiah, instead of a soldier king. That’s not what he signed up for. We hear that in his rebuke. Peter was not willing to stand up and be counted with that kind of Jesus. Peter was not willing to take up his cross. In fact, the verses that follow verse 34 provide even more clarity about what it means to take up one’s cross... (v.36)

For what does it profit a man to gain the whole world and forfeit his life?37 For what can a man give in return for his life?38 For whoever is ashamed of me and of my words in this adulterous and sinful generation, of him will the Son of Man also be ashamed when he comes in the glory of his Father with the holy angels.”

Are we invited by the words and works of Christ to follow him? Let us sit down, and count the cost, whether we can prefer our advantages by Christ before life itself, whether we can bear to think of losing our life for Christ’s sake and the gospel’s. When the devil is drawing away disciples and servants after him, he conceals the worst of it, tells them only of the pleasure, but nothing of the peril, of his service… but what there is of trouble and danger in the service of Christ, he tells us of it before, tells us we shall suffer, perhaps we shall die, in the cause; and represents the discouragements not less, but greater, than commonly they prove, that it may appear he deals fairly with us, and is not afraid that we should know the worst; because the advantages of his service abundantly suffice to balance the discouragements, if we will but impartially set the one over against the other.

We must be willing to stand up and be counted with Jesus, the Jesus who is rejected by the world, knowing that we too will be rejected in many ways. That’s taking up one’s cross.

It is to embrace the fact that being a Christian will mean loss, suffering, maybe even ridicule, possibly even death for Jesus’ sake. But in verse 34, Jesus describes a final step.

Listen again to all of verse 34...”If anyone would come after me, let him deny himself and take up his cross and follow me.”

Now, think for a minute. Jesus is telling his disciples and all those listening that the first step to new life is to give up on the old one. He goes on to tell them about a radical reorientation resulting in standing up for Jesus. But with that last phrase, “follow me”, He is calling us to look up.

For to this you have been called, because Christ also suffered for you, leaving you an example, so that you might follow in his steps. (I Peter 2:21)

And walk in love, as Christ loved us and gave himself up for us, a fragrant offering and sacrifice to God. (Ephesians 5:2)

And what does following someone require? That he or she stay in visual contact, right? Ever tried to follow someone in a car who forgot you were trying to follow, someone who is changing lanes all the time and racing through yellow lights. Doesn't work to well. But if you want to follow Jesus, then they eyes of your heart, the eyes of faith, need to stay in visual contact. Isn't this what the writer to the Hebrews was saying?

Therefore, since we are surrounded by so great a cloud of witnesses, let us also lay aside every weight, and sin which clings so closely, and let us run with endurance the race that is set before us, [2] looking to Jesus, the founder and perfecter of our faith, who for the joy that was set before him endured the cross, despising the shame, and is seated at the right hand of the throne of God. (Hebrews 12:1-2)

You were made for so much more than this world can ever offer you. You were made for eternal life with God, an eternal kind of life that begins the moment you believe, and continues to flourish as you walk by that same faith.

But to enjoy that life, each of us must give up, stand up, and look up. Those are three steps that describe, not only our initial conversion, but also every day as recipients of grace. It is the same call to the unbeliever and believer; to those who have never heard, and those who have often heard. It is both a call to know life in God's presence forever, and a call to experience His life in the here and now. Give up, stand up, look up.

Do you know how that whole conversation began, the one in which Peter called Jesus out of his mind, and Jesus called Peter “Satan”? Do you know how it started? Look at v. 27...

And Jesus went on with his disciples to the villages of Caesarea Philippi. And on the way he asked his disciples, “Who do people say that I am?” [28] And they told him, “John the Baptist; and others say, Elijah; and others, one of the prophets.” [29] And he asked them, “But who do you say that I am?” Peter answered him, “You are the Christ.” (Mark 8:27-29)

...if you confess with your mouth that Jesus is Lord and believe in your heart that God raised him from the dead, you will be saved. [10] For with the heart one believes and is justified, and with the mouth one confesses and is saved.

This morning, I know all of us are hungry for life. Some of you can feel those hunger pangs more acutely. Others are wanting to believe they are satisfied because they have some measure of worldly power and pleasures. But still others are experiencing the peace of God, even now. 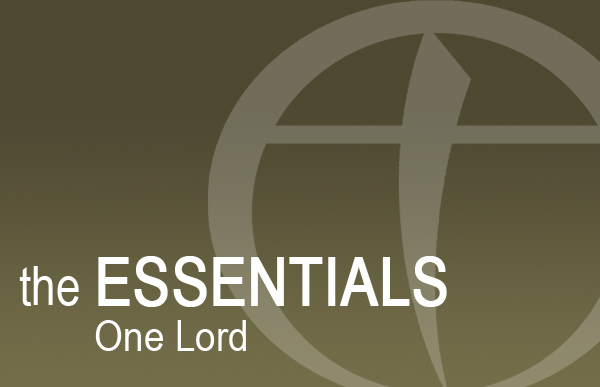 The Problem with Lordship (Romans 10:9)