The Problem with Lordship (Romans 10:9)

What do these words have in common? They are all examples of what I would call old-fashioned words, that is, they are words that are used very infrequently AND sound strange/odd to modern ears.

But what about this word...”salvation”? Does that word sound old-fashioned to you. In many cases, it does to me. And I think many people in our society would agree. “Salvation” is not a word we hear very often outside of the church.

But...don't be fooled. Even though salvation is not a word commonly used, it is a truth universally sought. Always, everywhere. In fact, no matter who you are, no matter what you experienced this past week, every single one of us was searching for salvation. And we still are, even this morning.

Well, wonderfully, God wants to talk to us this morning about that very thing. Turn with me over to Romans 10.

Listen once more to our main verse for this week. We heard it at the beginning of our time together. Let's hear it again. Verse 9...

...if you confess with your mouth that Jesus is Lord and believe in your heart that God raised him from the dead, you will be saved.

You see, because we are sinners, that is, because we are rebels against God, because we seek to live me-centered lives in a God-centered universe, we stand guilty before the perfect justice of God. But...because He is abounding in mercy, grace, and love, God initiated a plan to rescue us from the just punishment we all deserve.

Now, to understand what Paul is saying in verse 9, we need to look at the broader context of his words here in Romans 10. Let's do that be looking together at verses 5-13. Let's see what they reveal about this idea of salvation. The first thing we discover in verses 5-7 is...

Listen to what Paul writes in verses 5-7:

For Moses writes about the righteousness that is based on the law, that the person who does the commandments shall live by them. [6] But the righteousness based on faith says, “Do not say in your heart, ‘Who will ascend into heaven?’” (that is, to bring Christ down) [7] “or ‘Who will descend into the abyss?’” (that is, to bring Christ up from the dead).

But in Romans chapters 9-11, as Paul talks about his desire for Israel's salvation, his heart for his fellow Jews, he warns about trying to obtain a righteousness based on following the law of Moses. Why this warning? Because “the person who does the commandments shall live by them”.

Keep that phrase in mind and listen to what James writes about keeping the law: For whoever keeps the whole law but fails in one point has become guilty of all of it. (James 2:10)

And James is making his point with an exaggeration. No one can keep all the law, not even 99.9% of the law. We all fail, every single day, when it comes to obeying God. Therefore, if our living is dependent on doing the commandments, we will fail to fully know life...just as we fail to fully keep God's law. Therefore the “righteousness based on the law” is a 'dead end'.

But what about this “righteousness based on faith”? Well, Paul talks about that kind of righteousness using the language of Deuteronomy 30...which when you hear the quote, sounds like the absolute worst passage to use in order to make this point. Listen to it...

Now wait a minute. Aren't Paul and James telling us we can't do it? That we can't fully obey God's law and thus fully find life? Yes, that's exactly what they taught. So why use this passage about the command “not [being] too hard for you”? Well, what we need to see is that Paul is making the same point as Moses in regard to the availability, not ability, but the availability of God's word.

Paul, in verse 8, continues with the quotation from Deuteronomy 30. Listen to how he stresses the availability, the opportunity at hand...

But what does it [the righteousness based on faith] say? “The word is near you, in your mouth and in your heart” (that is, the word of faith that we proclaim); [9] because, if you confess with your mouth that Jesus is Lord and believe in your heart that God raised him from the dead, you will be saved. [10] For with the heart one believes and is justified, and with the mouth one confesses and is saved.

He stressed this point to the Philippians as well:

Indeed, I count everything as loss because of the surpassing worth of knowing Christ Jesus my Lord. For his sake I have suffered the loss of all things and count them as rubbish, in order that I may gain Christ [9] and be found in him, not having a righteousness of my own that comes from the law, but that which comes through faith in Christ, the righteousness from God that depends on faith— (Philippians 3:8-9)

By trusting in those truths, we gain the very thing we could never get from the law: moral rightness that is pleasing to God, that we might stand before God. That we might be saved...saved from what we deserve for our failure to obey God, saved from what we deserve because ultimately, pleasing God takes a backseat to pleasing myself. Luke records what Paul preached in Acts 13:39...and by him [Jesus] everyone who believes is freed from everything from which you could not be freed by the law of Moses.

Now let's be clear. Verse 9 is not teaching that a verbal confession is necessary to be saved. Paul is simply using the language of Deuteronomy 30 to make his point. That's why he talks about how the “mouth” and the “heart” are involved. But did you notice in verse 10 that he switches that order? How he talks first about the heart, and then the mouth.

Paul is clearly talking about faith at every point in these verses: the righteousness based on faith, the word of faith, and about believing. Therefore when he talks about confessing, he's talking about a confession of faith; a confession that springs up from faith. We'll talk more about this in a few minutes. But first notice what Paul is stressing in verses 11-13...

[Paul says this about this salvation through faith...] For the Scripture says, “Everyone who believes in him will not be put to shame.” [12] For there is no distinction between Jew and Greek; for the same Lord is Lord of all, bestowing his riches on all who call on him. [13] For “everyone who calls on the name of the Lord will be saved.” (Romans 10:5-13)

Salvation. Remember what I said earlier? Even though salvation is not a word commonly used, it is a truth universally sought. If your rebellion against and separation from God has left a gaping , Grand Canyon-size hole in your soul (which it has), then you will always trying to be fill it with something else, whether it's possessions, position, prestige, pleasure, or power of some sort.

So everyone, every day, is looking around them for what can only come from above them. They are looking for salvation. In most cases, they just don't know it.

But as Paul has emphasized for all of us, not just Jews, you will be saved if you believe “Jesus is Lord”. Both here, and in I Corinthians 12:3, Paul quotes the earliest, the simplest confession of Christian, saving faith. It is only three words in English, and two in the original Greek in which Paul wrote: “Jesus is Lord”.

Remember, Paul told the disciples in Philippi that at the end of history...that at the name of Jesus every knee [would] bow, in heaven and on earth and under the earth, [11] and every tongue confess that Jesus Christ is Lord, to the glory of God the Father. (Philippians 2:10, 11)

But what does it mean to trust or to believe that “Jesus is Lord”?

Well Paul knew, as he affirmed in I Corinthians 8:5, that in this world, there are many “lords”. But the NT clearly teaches us there is only one “Lord of Lords” (Revelation 17:14). And verse 12 of Romans 10 makes the same point: “the same Lord is Lord of all”, that is, there is no one in authority on this planet who is not ultimately under the authority of Jesus Christ.

Consider what Jesus told his disciples about being under His authority: “Not everyone who says to me, ‘Lord, Lord,’ will enter the kingdom of heaven, but the one who does the will of my Father who is in heaven.” (Matthew 7:21) “Why do you call me ‘Lord, Lord,’ and not do what I tell you?" (Luke 6:46)

So everyone is ultimately under His authority, but clearly, everyone does not submit to Him, even some who call Him “Lord”. So this must mean that the confession of genuine faith, the confession that declares “Jesus is Lord”, is a statement of submission.

And why does Paul go on to talk about also believing God raised him from the dead? Is Paul minimizing faith in Christ's death? Not at all. He's talked over and over about Christ's death up to this point in the letter. He talks about faith in Christ's resurrection because we must believe God is calling us to submission to a LIVING Lord, not just a figure of history.

In fact, when Paul says in Romans 10:13 that “everyone who calls on the name of the Lord is saved”, he is quoting Joel 2:32. And in Joel, the word translated “Lord” in our English Bibles is actually the personal name of the God of Israel, Yahweh. So amazingly, Paul applies this saying to Jesus...equating Jesus with Yahweh. That is, Jesus is God. Of course He is Lord!

So Romans 10:9 is describing how we are saved. True repentance and saving faith mean remorsefully rejecting my agenda of control, and through the forgiveness of the cross, submitting to the loving leadership of a living Lord, Jesus Christ.

So the gospel message calls us to do the very same trust our original parents rejected in the Garden. But sadly, this is what some Christians today are teaching. Listen to this quote:

“It is imperative to trust Christ as personal Savior and be born again. But this is only the first decision. Acknowledging Jesus as Lord is made by believers... The decision to trust Christ as Savior and then make him Lord are two separate, distinct decisions. The first is made by non-believers, the second only by believers. The two decisions may be close or distant in time. But salvation must always precede lordship. It is possible, but miserable, to be saved without ever making Christ Lord of your life.” (Rich Wager, “Confident Living” magazine)

Is that what Paul just taught us? It isn't. In contrast to this modern writer, the problem with lordship is not our confusion about trusting Christ as Savior and acknowledging Him as Lord. The problem with lordship is that we don't want anyone telling us what to do...which of course, is our problem, not the Lord's. And of course, this is the heart of sin: not honoring God as God (Romans 1:21), but exalting ourselves as gods. 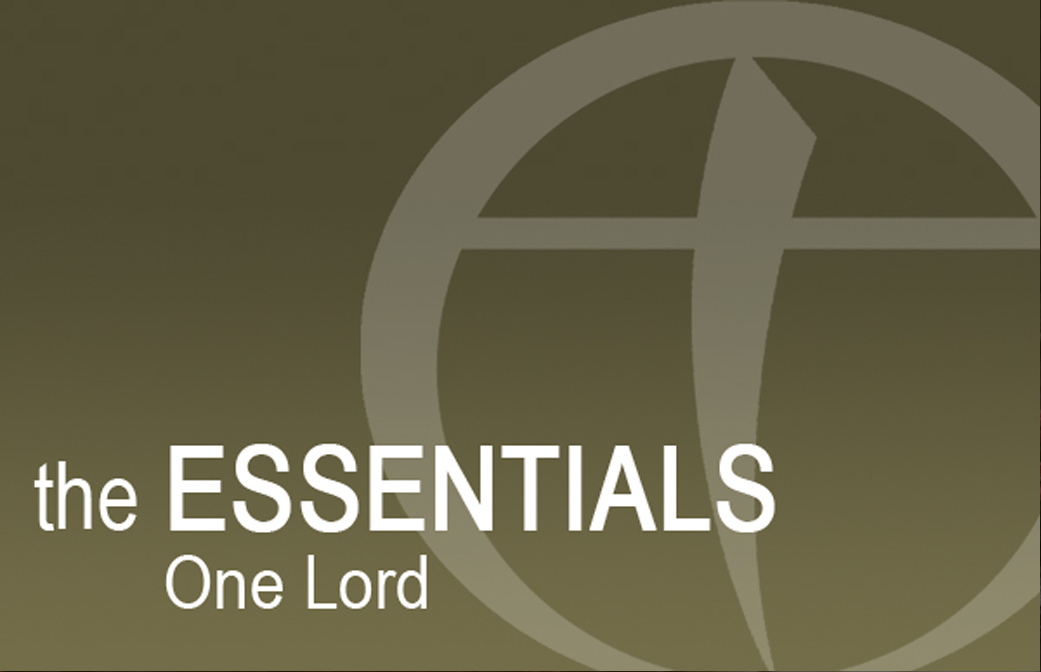