I. Have You Ever?

Would you just look at the title of this message: “Easter and the End of the World”? Seriously? Have you ever seen these two subjects talked about together? Have you ever seen a stuffed bunny with a t-shirt that says, “Hop into the Apocalypse”? Have you ever heard someone say, “Yep, one day the sky itself is going to crack open like a giant Easter egg”? Has any kid ever found a 'how to build an underground bunker' manual in their Easter basket? Have you ever heard anyone say on Easter, “The world is ending!”, with the response, “It is ending indeed!”?

Do these thing really go together, Easter and the end of the world? Well, though it isn't a very common or popular pairing, it's exactly what we find in Revelation chapter 1. Would you turn there in the Bible this morning. If you are using the blue Bibles that we've made available, you will find Revelation 1 on page 1028.

As most people know, Revelation is a book that ultimately deals with the end of the world, or as the Bible often puts it, the end of the present age. But before the book gets into the really strange images and elements for which it's famous, it begins with a vision of Jesus. It is a vision cast in symbolic imagery. And it was a vision given to the Apostle John, one of the men who followed Jesus during His earthly ministry in Israel.

After John describes Jesus in verses 12-16, we read about his response and the words of Christ in verses 17 and 18. Look at those verses with me:

When I saw him, I fell at his feet as though dead. But he laid his right hand on me, saying, “Fear not, I am the first and the last, [18] and the living one. I died, and behold I am alive forevermore, and I have the keys of Death and Hades.”

Now even though we're only dealing with two verses, there's so much God wants to show us here. What I'd like to do is work backwards as we look at four related truths, truths that center on the image of keys we find at the end of verse 18. The first thing we discover here is that...

Jesus tells John at the end of verse 18, “I have the keys of Death and Hades”. So wait...what in the world does that mean? Well, we find these two elements (Death and Hades) mentioned together three more times in the book of Revelation. Listen to Revelation 6:8...

And I looked, and behold, a pale horse! And its rider's name was Death, and Hades followed him. And they were given authority over a fourth of the earth, to kill with sword and with famine and with pestilence and by wild beasts of the earth. (6:8)

The last two occurrences of this pair are found in Revelation 20:13, 14:

While Hades was a character and place in Greek Mythology, it was also one of the words in Greek that simply meant, “the grave” or the “realm of the dead”. Throughout Revelation, they are personified, as if they were beings. This pairing is first found in the OT where you can find them in many place, including Psalm 18:5 where David writes:

...the cords of Sheol [the grave] entangled me; the snares of death confronted me.

In that verse, they are clearly two ways of saying the same things. So there is no reason to separate “Death and Hades”. Taken together, they simply remind us of where each of us is headed. You will die. I will die. That body you are enjoying right now, will one day be six feet under.

So what does it mean that Jesus has the “keys of Death and Hades”? It means He can unlock the door that shuts all of us in. It means He has access out of that which is, for us, inaccessible. But that leads directly to our second point. We also are reminded here that...

And so, because Jesus was the first human being to ever beat death, He gained power as a human being over the very force that imprisons all of us. Here that power is visually represented by the image of keys. As is still the case today, but even more so in the ancient world, keys symbolized power, position, and prestige. And Jesus has those in spades!

Seriously, when we think about the keys that Jesus has won, which religious leader, which military leader, which political leader, which wise man, which man or woman of distinction could ever be compared with Him? He stands alone, doesn't He? But why Jesus? How did He get those keys? Well, if we die because we have rebelled against God and gone our own way, then Jesus could not be held based on that criteria. He was totally innocent. On the cross, He died for our sins, not His own. But there's something else. We also know, third...

Now, I know it sounds kind of strange to say that Jesus had to win the keys, while at the same time stating He was the one who cut or made the keys in the first place. But that's exactly what we are reminded of here at the end of verse 17, beginning of verse 18. Jesus told John, “I am the first and the last, and the living one.”

Now to understand how significance this is, just look up at verse 8 of chapter 1. There we read:

“I am the Alpha and the Omega,” says the Lord God, “who is and who was and who is to come, the Almighty.”

“Behold, I am coming soon, bringing my recompense with me, to repay each one for what he has done. [13] I am the Alpha and the Omega, the first and the last, the beginning and the end.”

Clearly, Jesus is the one speaking in these verses, while it was God the Almighty speaking in 1:8. But both are referred to as “the Alpha and Omega”, which is just another way of saying, “first and last” or “beginning and the end”. What does that mean? It means Jesus is God! This is confirmed by the fact that Jesus, in 1:18, also refers to Himself as “the living one”, which I believe is a reference to the OT, where God often refers to Himself as the “living God”.

Do you see what this means? It means that even though Jesus the human being could and did die, Jesus, the Son of God, could not. It's another reason, Death and Hades could never truly hold Jesus. It's the reason Jesus was and remains perfectly innocent. Jesus could not stay dead...because He is life itself. He defines the beginning and end of existence. As God, He is the creator of life. In His Gospel, John sums all of this up so beautifully...

The “keys of Death and Hades” only exist because God made that power over death possible. And the only way Jesus could have won them is because He is God. But all of these amazing truths lead us right back to the beginning of Jesus' words in verse 17, where we learn that...

What are very first words that Jesus announces to John? Verse 17 says...But he laid his right hand on me, saying, “Fear not...”. “Fear not” (2x) So why aren't Jesus first words, “Hey, John! So good to see you again.” Well, it's because of what we read when we get all the way to the beginning of verse 17...When I saw him, I fell at his feet as though dead.

There are many examples in the Scriptures of sinful human beings fearing for their lives when they find themselves in the presence of the King of heaven or in the presence of one of His angelic messengers. Clearly, John is shaken up by what is happening. He fears for His life in light of the glorious vision He's beholding and the glorious Christ who stands before him.

But that's exactly why Jesus goes on to tell him all of the amazing things we just talked about. Because John believes death is close, Jesus' response is...“Fear not, I am the first and the last, [18] and the living one. I died, and behold I am alive forevermore, and I have the keys of Death and Hades.”

III. He Has Fixed a Day

But the million dollar question this morning is, in light of all this, “Will it be true for you?” Will death stop you? Will the grave hold you? Well in one sense, death and the grave will not stop or hold any of us. We already saw from Revelation 20 that Death and Hades will one day be forced to give over all those who have been held in their power. But they only do so when it is time for humanity to face God's ultimate justice.

Easter and the end of the world. Paul made the same connection when he preached to the Athenians in Acts 17...

“The times of ignorance God overlooked, but now he commands all people everywhere to repent, [31] because he has fixed a day on which he will judge the world in righteousness by a man whom he has appointed; and of this he has given assurance to all by raising him from the dead.” (Acts 17:30-31)

Why is that? Because we will be judged and sentenced by God himself. Jesus was and is innocent. We are not. Each of us is guilty of living a me-centered life in a God-centered universe. Think about it. We are stubborn, we are senseless, we are careless. We are indifferent and irritable and immoral. We are bitter. We are hateful. We are greedy. We are fearful and faithless. We care too little for that which really matters and care too much for that which really doesn't matter. We use our tongues to hurt those around us, we use our eyes to consume that which is not ours, we use our minds to escape from our responsibilities, and we use our feet to go all the places God warns us not to go.

Notice that these two verses point to two incomparable gifts that Jesus wants to give us. He wants to use those keys to free us in the end; to raise our bodies to an eternity in the incredibly satisfying and never-ending love of God. But in light of that, He also wants to give us courage for today; courage to live a very different life; a life freed from the slavery of the fear of death. We read about that very thing in Hebrews 2:14, 15...

Since therefore the children share in flesh and blood, he himself likewise partook of the same things, that through death he might destroy the one who has the power of death, that is, the devil, [15] and deliver all those who through fear of death were subject to lifelong slavery.

Have you ever thought about the fact that so much of what we do in terms of me-centeredness and self-grasping in this life flows from a fear of death? From a fear of not getting enough before it's too late? From a fear of daily having to face that reality?

But remember His Jesus' first words to John here: “Fear not...”.

So how can you be encouraged as John was encouraged? How can you find that same courage? How can you be assured that your prison door will be opened? By believing Jesus has the keys, won the keys, cut the keys, and will use those keys for anyone who trusts Him in this way. Let me say that again...

Let's pray and ask God, in light of what we've seen, to give all of us the gift of faith, or the gift of a deeper faith, this Easter. 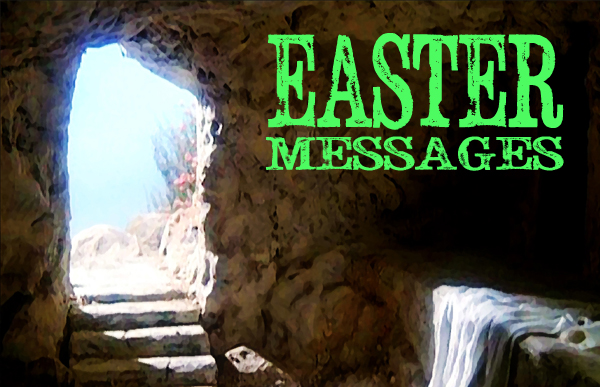