April 7, 2013 Speaker: Bryce Morgan Series: The Jewel: Understanding the Beauty of the Cross

I. The Most Valuable of All Jewels

Did you know the most expensive jewel ever to be sold at auction was a 24.78 carat pink, round-cornered, rectangular, step-cut diamond that went for $46.2 million dollars? But a diamond known as the Cullinan Diamond, or the Great Star of Africa, first weighed in at a whopping 530 carats, and has an estimated calue of $400 million dollars. But did you know, there are two diamonds, the Sancy diamond (which is part of the French crown jewels), and the Koh-I-Noor (which is set on the crown of England), both of which are smaller than the Cullinan, but their value has never been set? They are simply labeled as “priceless”.

The reason I want to refer to the cross as a jewel or the jewel is because, like a beautifully cut jewel, the cross has many sides to it. As you turn it, you can see the brilliance of its many facets. And those are the facets we are going to explore this month by digging into God's word.

Listen to what we read here in the final verses of chapter 2, beginning in verse 22:

He committed no sin, neither was deceit found in his mouth. [23] When he was reviled, he did not revile in return; when he suffered, he did not threaten, but continued entrusting himself to him who judges justly. [24] He himself bore our sins in his body on the tree, that we might die to sin and live to righteousness. By his wounds you have been healed. [25] For you were straying like sheep, but have now returned to the Shepherd and Overseer of your souls.

Now, in the immediate context here, we find that Peter is actually speaking to servants and slaves about how to deal with difficult masters. How should they, as followers of Christ, respond to the cruelty of an unjust master? Well to answer that question, Peter directs them to simply endure according to the example of Christ. Because, verse 21, Christ also suffered for you, leaving you an example, so that you might follow in his steps.

And that verse, verse 21, simply enhances the concept we find in verse 24, where again, we read that Jesus “bore our sins in his body on the tree”...or as another translation puts, “he carried our sins in his own body onto the cross”.

Do you see the brilliance of this facet of the jewel of the cross of Christ? Do you see what this is telling us? This is the beauty of the truth of substitution. The death of Jesus on the cross was substitutionary, that is, when Jesus suffered and died, He suffered and died in our place/ The 19th century British preacher Charles Spurgeon said very simply “I am lost if Jesus be not my Substitute”.

Far earlier, in an ancient Christian document called the Letter to Diognetus (which dates to sometime around 150-160 AD), the writer says this about the brilliant truth of substitution:

He Himself took on Him the burden of our iniquities...the holy One for transgressors, the blameless One for the wicked, the righteous One for the unrighteous, the incorruptible One for the corruptible, the immortal One for them that are mortal.

And of course, the New Testament affirms this is in many other places. In Romans 4, verse 25, Paul tells us about “Jesus our Lord, who was delivered up for our trespasses and raised for our justification.” And in Galatians 1:4, Paul describes Jesus as the one who “gave himself for our sins”.

In Hebrews 9:28, we learn about “Christ, having been offered once to bear the sins of many”. And Peter, in this same letter, in 3:18, will go on to write that Christ also suffered once for sins, the righteous for the unrighteous.

This idea that Jesus was our substitute is absolutely central to the message of the gospel. But let's take a minute and briefly consider what else this passage from I Peter teaches us about this idea of substitution.

Though it is not obvious at first, when we dig a little deeper, we discover that the substitutionary death of Jesus was a predicted substitution. Where do we see that? We see that at the end of verse 24. Do you recognize that simply phrase, “by his wounds, you have been healed”? Yes, it comes from Isaiah 53:5. But just listen for a minute to what we read in Isaiah 53 about this facet of the Jewel:

Surely he has borne our griefs and carried our sorrows... (Isaiah 53:4)

But he was pierced for our transgressions; he was crushed for our iniquities... (Isaiah 53:5)

And if we have any doubt of who the prophet is talking about here, Matthew 8, Luke 22, and Acts 8 make it clear that this prophecy was fulfilled in Jesus Christ.

And so, very clearly, we see that it was part of God's plan for Jesus to be our substitute. And if it was part of God's plan, then one of the things we need to make explicit right at the beginning of this series is that the number one reason Jesus died is so that God might be glorified. Just before His death, Jesus prayed in John 17:1, “Father, the hour has come; glorify your Son that the Son may glorify you”

But we also see here in I Peter 2 that the substitutionary death of Jesus was additionally a purposeful substitution. Look at that middle phrase of verse 24: He himself bore our sins in his body on the tree, that we might die to sin and live to righteousness.

As Peter puts it in 3:18: For Christ also suffered once for sins, the righteous for the unrighteous, that he might bring us to God...

But there's something else we need to think about it, or I should say, something we need to think more deeply about. I want you to notice that verses 22, 23, and 25 were all written in order to emphasize two truths that are essential to this idea of substitution: first is the reality of Jesus Christ’s absolute innocence. Jesus was not simply a good man. He was the best of all men. He was not simply good. He was perfectly good…in every way…all the time...even when He was unjustly abused. That’s an idea that we might struggle to get our mind around.

But second, the other side of the coin is the reality of our guilt. We are not simply in the wrong. We are perfectly guilty. Jesus died, not for anything He did, but as we see here, He “bore our sins”; we were the ones “straying like sheep”.

“He himself bore Chuck Swanson’s sins in his body on the tree.” “He himself bore Laura Peter’s sins in his body on the tree.” Go ahead and insert your own name there. We need to come to grips with the reality that someone else took the fall for us. That a perfectly innocent man suffered and was brutally killed because of your choices, and words, and attitudes, and desires, and thoughts.

In the Old Testament, In Leviticus 16, we read about how, once a year, on the Day of Atonement, the High Priest of Israel would offer up two goats for the sins of the people. One goat would be offered up on the altar. But the other goat was not killed. Instead, the High Priest would lay his hands on the head of the goat and confess all the sins of the people. In Leviticus 16:21 and 22, we read that in doing this, the priest was putting the sins “on the head of the goat”, and the goat was “bearing (or carrying) all their iniquities”. Where was he carrying them? Well, the goat, this “scapegoat”, was then sent into the desert, never to be seen again.

Listen to how writer expresses the connection between that ritual and this facet of the Jewel we’ve been talking about this morning:

We must, so to speak, lay our hands on Christ's head and confess over Him all our transgressions and rebellion...We must believe that just as the Old Testament scapegoat symbolically carried away the sins of the Jews from the presence of God, so Jesus actually carried away our sins. (Jerry Bridges)

III. Responding to Our Substitute

I don’t know about you, but when I was growing up, whenever we had a substitute teacher in our class, it always seemed to be opportunity for the class to act badly. While a substitute was an appreciated blessing for a sick teacher, he or she was ‘fresh meat’ for the kids in my class. In most cases, we did not respond very well to our substitute.

But how does God want us to respond to THE substitute? Listen to how the 17th century Puritan Pastor Thomas Watson expressed this question:

Sometimes we need to be reminded of this central truth in a different way. In 2001, I was invited to a pastor’s screening of the film To End All Wars, based on Ernest Gordon’s book, Miracle on the River Kwai. Gordon was one of many British soldiers captured by the Japanese during World War II and imprisoned in the jungles of Thailand. These soldiers endured a living hell, cruelly treated and malnourished by their captors. One of the men was described as six feet tall and weighing 65 pounds. Listen to how one writer described one of the pivotal events in the book:

"One day a shovel is missing. The officer in charge becomes angry and demands that the missing shovel be produced or he will kill them all. No one budges until finally, one man steps forward. The officer beats the man to death. At the next tool check, there is no shovel missing and the men realize that there had been a miscount at the first check point. The prisoners are stunned. An innocent man was willing to die to save everyone else.

Gordon goes on to describe a greater recognition of the suffering Christ and as a result, the men began to treat each other with more care and kindness. The change was so significant that when the skeletal captives were liberated, they could, instead of attacking their captors, say to them:

“No more hatred. No more killing. Now what we need is forgiveness.""

How would you feel, how would you respond, if someone step forward and died for you; if someone took the blows for you. Well, because of what Jesus did, there is no “IF”. Christ died for our sins. He took our place…your place, my place.

Let’s pray and ask God to help us not only treasure this Jewel above everything else, but that we would ultimately treasure the One who took our place, and that we would not be ashamed to hold up this Jewel, as Sent Ones on One Mission, so that others might know the love of Jesus. 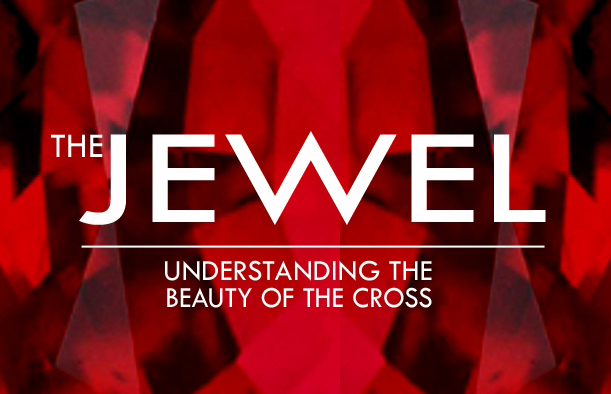 More in The Jewel: Understanding the Beauty of the Cross

The Brilliance of Redemption (Colossians 1:13, 14)