How a Baby Saved the World

Did you know there was a man who saved the world? His name? His name was...Vasili Alexendrovich Arkhipov. Not a household name, right? Listen to how one source tells the story:

“On October 27th, 1962, during the Cuban Missile Crisis, a group of eleven United States Navy destroyers and the aircraft carrier USS Randolph located the Soviet submarine B-59 in the waters near Cuba. Despite being in international waters the Americans started dropping practice depth charges, explosives intended to force the submarine to come to the surface for identification. There had been no contact from Moscow for a number of days and, although the submarine's crew had earlier been picking up U.S. civilian radio broadcasts, once B-59 began attempting to hide from its U.S. Navy pursuers, it was too deep to monitor any radio traffic, so those on board did not know whether war had broken out between the US and the USSR. The captain of the submarine, Valentin Grigorievitch Savitsky, believing that a war might already have started, wanted to launch a nuclear-tipped torpedo.

Three officers on board the submarine – Savitsky, the political officer Ivan Semonovich Maslennikov, and the second-in-command Arkhipov – were authorized to launch the torpedo if they unanimously agreed to do so. An argument broke out among the three, in which only Arkhipov was against the launch. Although Arkhipov was only second-in-command of submarine B-59, he was actually Commander of the entire flotilla of submarines including B-4, B-36, and B-130, and of equal rank to Captain Savitsky. After an extended and intense argument, Arkhipov eventually persuaded Savitsky to surface the submarine and await orders from Moscow.”

You see, had Savistsky launched that nuclear torpedo, it most likely would have inflamed the already extremely tense standoff between the Americans and the Soviets. Most likely, the US would have responded with its nuclear arsenal, which would have led to the USSR to attack with its nuclear arsenal. On October 27th, 1962, the world came as close as it's ever come to a nuclear Armageddon. But because Vasili Arkhipov held his ground, we're here today.

But would you like to hear something even more amazing? Did you know there was a baby who saved the world? Yep, a baby! His name? His name was Yeshua ben Yosef. We know him as Jesus. But wait a minute. How exactly did the baby Jesus save the world? Well, listen to the beginning, the very beginning, the real beginning of the Christmas story:

Did you hear the answer to our question? Did you hear how a baby saved the world? In one sense, He saved the world simply by being born! Now, we know Jesus' birth is not the entire story, but notice how important it is to the Apostle John. “The word became flesh”! And the importance of this is that THE WORD became flesh.

You see, the baby Jesus saved the world simply by being born because His birth meant that God himself was among us. But not only among us; the Son of God became one of us. And that amazing truth, that the Word, who is the Son, became a human being, that truth means that when God entered the world in this way, nothing could ever be the same again.

The birth of, the incarnation of, the en-fleshing of God’s Son was like a small stream of water breaking through at only one point on a massive dam. But if a leak like that is not fixed, do you know what will happen. Yep, that hole will get larger and larger until a torrent of water bursts through and destroys that dam.

You see, Vasili Arkhipov’s birth did not save the world because there were so many things that could have gone differently in His life. He may have never ended up on that sub. He may not have developed the moral strength he demonstrated on that fateful day.

The baby that His earthly mother laid in a manger became the man whom His heavenly Father hung on a cross…for OUR sins. The child that Mary delivered would become the man who delivers all of us, including Mary. And that man, three days later, would do what no one else has ever done: he rose again from the dead, never to die again.

Brothers and sisters, friends, this is not about religion. This is about one simple question: “Do you believe the Word became flesh and dwelt among us?” If you truly believe that, then you must listen to that Word…AND you must receive the one Christmas gift that really matters: through faith God wants you to receive the rescue, the salvation, that this baby makes possible.

On the back of your bulletin there is something we call a Confession of Trust. It’s a clear explanation of what God wants us to believe in order to be forgiven, in order to have peace with Him, in order to be changed, in order to live forever with Jesus Christ. 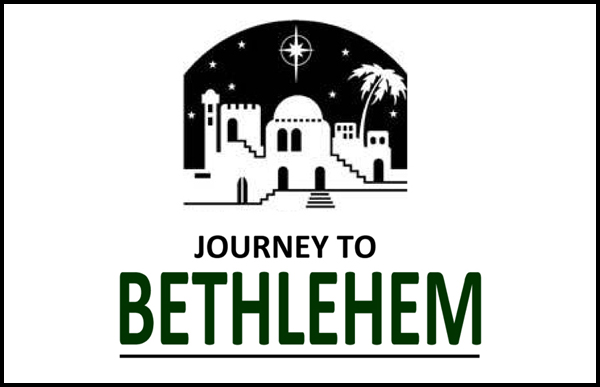 More in Journey to Bethlehem