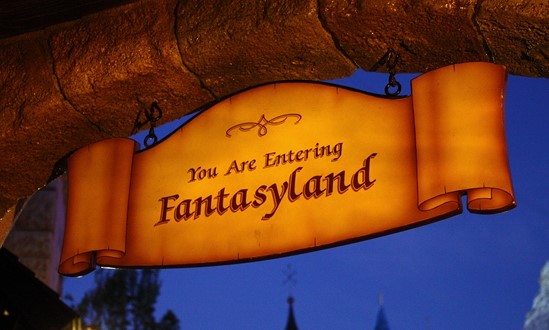 How Falsehoods and Fictions Tempt Us Away from Reality

Let me be honest: when visiting the different, themed sections of Disneyland, Fantasyland is not typically high on my priority list. But even those who enjoy the Tea Cup ride or King Arthur's carousel know there's much more to the Disneyland experience. Think about it: who would pay full price for admission, but then simply cycle through just the ten or eleven rides in Fantasyland? No one.

But God's word warns us that, too often, we're the kind of people who do something very similar when it comes to everyday life: we regularly choose to pitch our tent in a land of fantasy rather than reality. Visiting a fantasy world can be fun (and even enriching) as a once-in-a-while kind of experience (e.g. going to the movies, attending a 'murder mystery' party, or dining at Medieval Times). But as the complexities and bitterness of real life unfold around us, Scripture reminds us that our sinful default is to escape into falsehoods and fictions rather than face reality. This happens on both the personal and public level. Today, these falsehoods and fictions, these alternate realities, seem more abundant and attractive than ever before.

But such temptations are far from new. We find similar dynamics in the 2500 year-old book of Jeremiah. In the early years of the sixth century before Christ, the citizens of Judah and Jerusalem were grappling with the ever-present shadow of the Babylonian empire. The ruler of Babylon, Nebuchadnezzar, had exacted tribute from Jerusalem in 605 B.C. (Daniel 1:1-2), laid siege to the city in 597 B.C. (II Kings 24:10), and eventually, destroyed the city in 586 B.C. (II Kings 25:1). The account of Jeremiah's ministry to the people and leaders during these times is revealing in regard to our present struggles with favoring fantasy over reality. Consider what we learn:

The favored fantasy in Jeremiah's time was a false, political narrative. In a time of serious civil unease, the political leaders in Judah wanted to promote a message that would be popular with the masses. And certain false prophets provided that message: “The king of Babylon will not come against you and against this land” (37:19) They prophesied “peace” (28:9) rather than the hard truth of defeat and captivity (the very thing God had decreed because of their disobedience; the very truth Jeremiah faithfully declared). Sadly, the popularity of that false message reminds us that...

We not only tolerate fantasy, we crave it. God warned the people in Jeremiah 23:16-17 about false prophets who were “filling [them] with vain hopes”. Such prophets were “speaking visions of their own minds”, offering palatable messages in a time of crisis. But these so-called prophets were not the only ones God would hold accountable. He also indicts those who were hungry for such lies, describing them as “those who despise the word of the LORD” and “everyone who stubbornly follows his own heart”. But we also learn from Jeremiah that...

Favoring fantasy isn't always driven by sinful aims. In Jeremiah 27:16–18, the prophet does something interesting. He validates their concern about the sacred “vessels of the LORD's house”, but calls them to offer true prayers instead of false prophecies. This may be a good reminder that sometimes people, in difficult situations, want to accept wrong information for the right reasons. But such reasons should inspire us to pray rather than look for narratives or alternative realities that help us feel better in the midst of hard times. Could turning to such things be keeping us from key opportunities to turn to God first? Sadly, this book also reminds us that...

We can be resistant to reality, even when we feel the friction of our fantasy. In Jeremiah 42, those who survived the destruction of Jerusalem in 586 B.C. and were left in the land found themselves seeking God's guidance from the prophet: should they stay in the land or flee to Egypt? But though they had seen every one of Jeremiah's words fulfilled, even living in the rubble of God's judgment, they still responded to the prophet's divine direction with defiance: “You are telling a lie. The LORD our God did not send you to say, ‘Do not go to Egypt to live there...’” (43:2). They had already made up their mind about what the 'truth' should sound like, and Jeremiah clearly didn't possess it. Sadly, this posture would eventually lead to their ruin (42:15-17).

Some may think, “Well, this is an Old Testament account. The new covenant people of God have been set free by the truth (John 8:32).” But when the Apostle Paul wrote to his younger associate Timothy about his ministry within the church at Ephesus, he spoke in disturbingly 'Jeremiah-ish' terms:

For the time is coming when people will not endure sound teaching, but having itching ears they will accumulate for themselves teachers to suit their own passions, and will turn away from listening to the truth and wander off into myths. (II Timothy 4:3–4)

That is not simply a passage about happenings in some troubled church. It ultimately describes happenings in the human heart. It reminds us that we are the kind of people who often favor fantasy in the face of an unfavorable reality; people who not only visit 'Fantasyland', but in many cases, prefer to live there.

Today, reality is under attack on many fronts. We find people outside and inside the church denying biological realities, political realities, historical realities, and social realities. And as in Jeremiah's day, we find these same individuals embracing falsehoods and fictions, not because of the persuasiveness of facts or careful objectivity, but because they have already made up their minds about what the 'truth' should sound like.

All of this, of course, simply confirms a theological reality, the same theological reality so evident in the book of Jeremiah: “The heart is deceitful above all things, and desperately sick; who can understand it?” (Jeremiah 17:9) The goal of this kind of heart is not simply deception about worldly things, but ultimately, spiritual things. And the more we neglect the former, the more vulnerable we become in regard to the latter. Stop for a moment and ask yourself, “In what areas am I favoring fantasy over reality?”

Our only hope in light of such temptations is a new heart (Ezekiel 36:26) and a mind that is being renewed (Romans 12:2). Wonderfully, both of these are now possible and freely available to us through Jesus Christ, who has called us to live in his kingdom, rather than some kind of fictional, 'magic kingdom' of our making. Let us be courageous in Him, boldly walking in truth, trusting in his purposes, as the complexities and bitterness of real life unfold around us. And let us in all things be marked by the wisdom that comes from above:

But the wisdom from above is first pure, then peaceable, gentle, open to reason, full of mercy and good fruits, impartial and sincere. (James 3:17)